The chemistry between Go Young Soo (Park Ji Hoon) and Gae Ddong (Gong Seung Yeon) is no doubt one of the things that viewers can’t wait to see more of in JTBC’s “Flower Crew: Joseon Marriage Agency”!

After Lee Soo (Seo Ji Hoon) was suddenly crowned as the King, Go Young Soo directed his rage towards Gae Ddong, since their marriage was called off. Go Young Soo’s attitude towards Gae Ddong got even worse when she was accepted as a member of Flower Crew, and the relationship between the two became that of a cat and a dog.

Go Young Soo, jealous that Ma Hoon (Kim Min Jae) seemed to favor Gae Ddong over him, started to give Gae Ddong a hard time. In addition to constantly interrupting Gae Ddong during her interview, he called her “Three Months” following her addition to the crew in the belief that she would be fired after just three months. 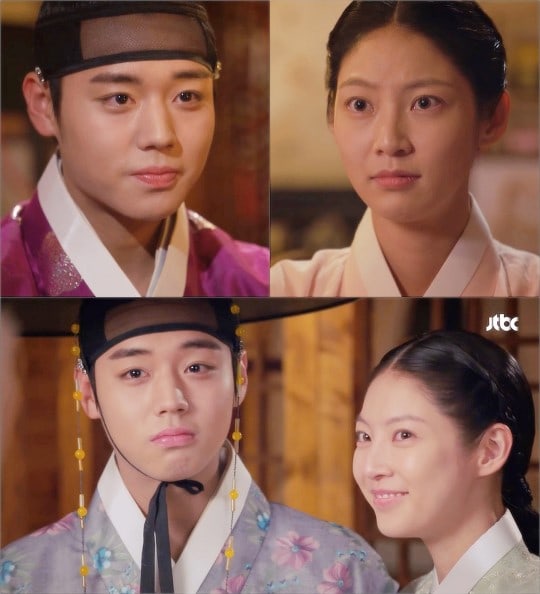 However, this “frenemy” relationship between the two began to change as they started to spend more time together as a team. They joined hands and showed great teamwork while putting on makeup for customers, and Go Young Soo eventually jumped into his new job as a stylist for Gae Ddong, who needed to undergo a makeover in order to look like a woman from a rich family and marry the king.

In addition, when Gae Ddong was ashamed of her hands that had turned rough due to the harsh jobs that she had previously taken on, Go Young Soo took her hands and washed them for her. While doing so, he complimented her by saying, “They are not embarrassing hands. They are diligent hands.” From head to toe, Go Young Soo dressed Gae Ddong with care, and she was able to find a completely new look. In the process, the two became close and started to care for one another.

Go Young Soo and Gae Ddong became even closer in episode 9, after Kang Ji Hwa (Go Won Hee) came to propose to Ma Hoon. For the first time, the two found one thing in common—their mutual dislike of Kang Ji Hwa. Viewers are anticipating how the two will continue to evolve from being frenemies to actual friends.