Eugene Describes What Her Marriage To Ki Tae Young Is Like

Eugene talked about her marriage to Ki Tae Young on “Please Take Care of My Refrigerator”!

Eugene appeared as a guest on the October 21 episode of the variety show, and she mentioned that her husband Ki Tae Young has lately been teaching their daughter Rohee about love by talking about the evil prince in “Frozen.” She said, “When they’re watching ‘Frozen’ and the prince comes on screen, he says, ‘You shouldn’t date that kind of man. It’s best if you introduce him to me and get approval.'”

The MCs guessed that she might feel envious when she sees Ki Tae Young showing so much affection for their daughters. “I have felt envious,” she said. She added with a laugh, “I love our children so much but he used to look only at me, and now his affection has passed on to someone else.”

Eugene also talked about the “stage of ennui” known to come to married couples after several years together. “I think the stage of ennui will come after 40 years,” she said. “The reason that I think it still hasn’t started yet is that we still want to go on dates together and be together just on our own.” 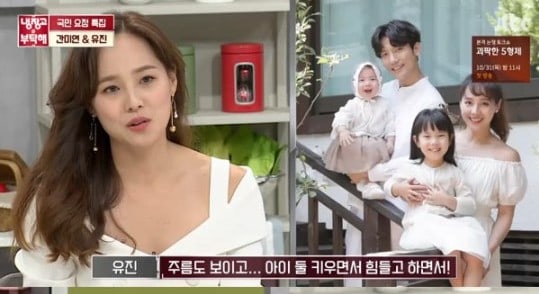 Please Take Care of My Refrigerator
Eugene
Ki Tae Young
How does this article make you feel?