Producing director (PD) Na Young Suk shared his thoughts on tvN’s “You Quiz on the Block”!

On the October 22 episode, Yoo Jae Suk and Jo Se Ho walked around the Seoul neighborhood of Sangam, which is known as the mecca of Korean broadcasting.

They headed inside the tvN headquarters due to bad weather and ran to ask for an interview when they heard the voice of star variety PD Na Young Suk. When they sat down, Jo Se Ho commented, “If Yoo Jae Suk is a great comedian, then PD Na Young Suk is a great PD. He’s the king of variety shows.”

When asked about the reason why he’s good at making variety shows, the PD shyly answered, “I originally worked on ‘2 Days & 1 Night‘ for so long that I thought I shouldn’t do a travel program for a while. But I didn’t have self-confidence. I wanted to do what I had done even if I got criticized a bit for it. Since I traveled around Korea for a while, I thought about going abroad.”

He continued, “I don’t know how it’ll be perceived if I say this, but I honestly think that a program should be successful, and it should record good viewership ratings. It’s something that everyone set out to do with their duties and careers on the line. You become awkward with one another if you fail.”

Yoo Jae Suk then brought up Na Young Suk’s salary of 4 billion won (approximately $3.4 million), which became a hot topic when it was reported. Surprised by the question, the PD replied, “I received some money.”

He explained, “That’s not my salary. I was so embarrassed. I felt grateful because it’s a large amount of money, but it felt embarrassing to say something when the articles came out. It’s not like I could explain it to a junior I ran into in the hallway. It was embarrassing in many ways.” 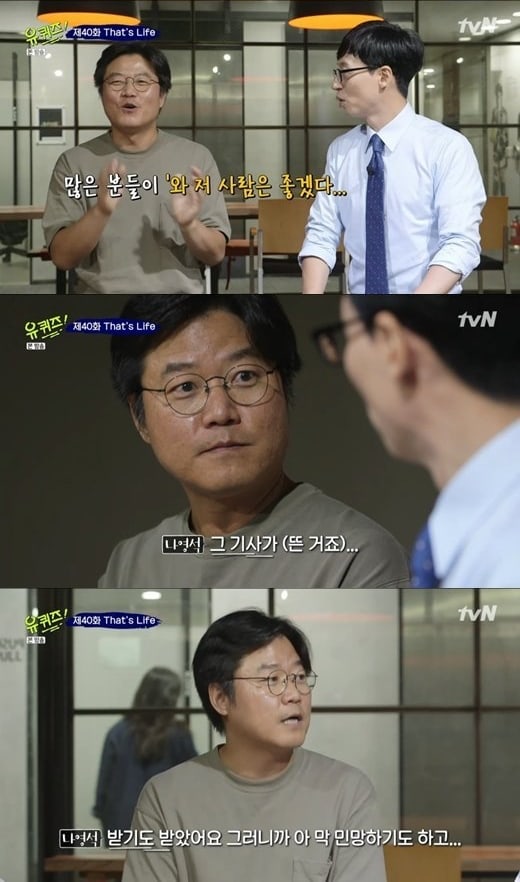 Na Young Suk
You Quiz on the Block
How does this article make you feel?