On October 23, WINNER held a press conference to commemorate the release of their third mini album, “CROSS.”

This is the first time that WINNER has made a comeback in the fall. In recent years, the group has gained a reputation for releasing upbeat, summery releases.

Song Mino said, “When people say WINNER, they often think of summer. That’s not a direction that we were aiming for. WINNER originally had an autumn vibe. Our song this time is similar to ‘Empty’ [their debut track]. As time went by, we became more mature. When ‘Empty’ was released, we were still rookies and we were really nervous and had a lot of stuff to think about it. This time, we were able to focus more carefully and deeply on writing the music. I think that it really expresses our sincerity.”

Kang Seung Yoon explained that the meaning of “CROSS” was, “Four very different people gathered together to become one WINNER, but on the other hand, we continue to grow in four separate directions. There are also a lot of crossover tracks on the album. After ‘REALLY REALLY,’ we released mostly bright and fun songs, so we wanted to change up our image.”

Lee Seung Hoon said, “It’s true that we had a change of mind due to external factors. We will have to enlist soon, and the time we have left with fans is limited, so we started to take things more seriously.”

Later, Kim Jin Woo was also asked about enlistment, as he is the oldest member of WINNER. He responded, “I don’t know what will happen to WINNER’s promotions. I think everyone will promote solo for the time being. We want to meet our fans as often as possible.”

Lee Seung Hoon also talked about his nude scene in the music video for “CROSS.” He said, “Our job is to look glamorous in front of the camera, but I wanted to show that we all have scars on the inside. I wanted that scene to represent the side of myself that was tired and hurt, stripped of all the fancy clothes and accessories. It also represented the people who have been hurt and fatigued by modern society. I filmed the nude scene because I wanted to represent who I really was inside rather than rely on clothes. We originally filmed with underwear on, but when I monitored the scene afterwards, it didn’t feel right, so I took off the underwear.”

“CROSS” and title track “SOSO” was released on October 23 at 6 p.m. KST. WINNER will be kicking off their CROSS tour in Seoul from October 26 to 27 before heading to Taipei, Jakarta, Bangkok, Kuala Lumpur, Manila, and Singapore. 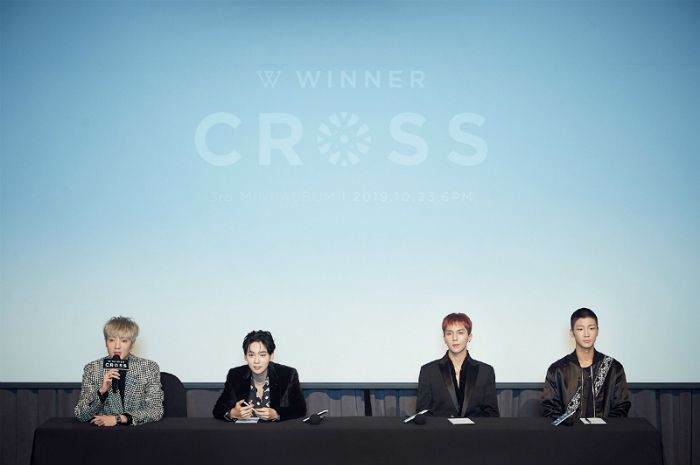