On October 23, WINNER held a V Live broadcast to talk about their third mini album “CROSS.”

Each member shared stories from filming the music video for their title track “SOSO.” “We expressed the appearance of acting cool despite going through a difficult time,” began Kang Seung Yoon. “We captured heavy, lonely feelings for our transformation.”

The group’s leader then said, “I filmed while hanging from the air. I was suspended from the air for about four hours and had a bruise for about three days.”

Showing viewers a photo from the shoot, Lee Seung Hoon said, “The motif for this V Live was inspired by the MV set. People are talking, but I don’t fit in. I expressed ‘outsiders’ who want to fit in with the ‘insiders.’ The message that I wanted to convey was well conveyed in the MV, so I feel proud.” Praising his fellow member, Kang Seung Yoon added, “The main character of this music video is Lee Seung Hoon.”

Lee Seung Hoon continued, “There’s a scene where I break a chandelier. I thought that we had purchased it, but it turned out to be a rental. My face bled after the fragments hit my face.” Song Mino added, “Seung Hoon said that he was okay when the staff was worried, but immediately ran to the dermatologist the next day.” 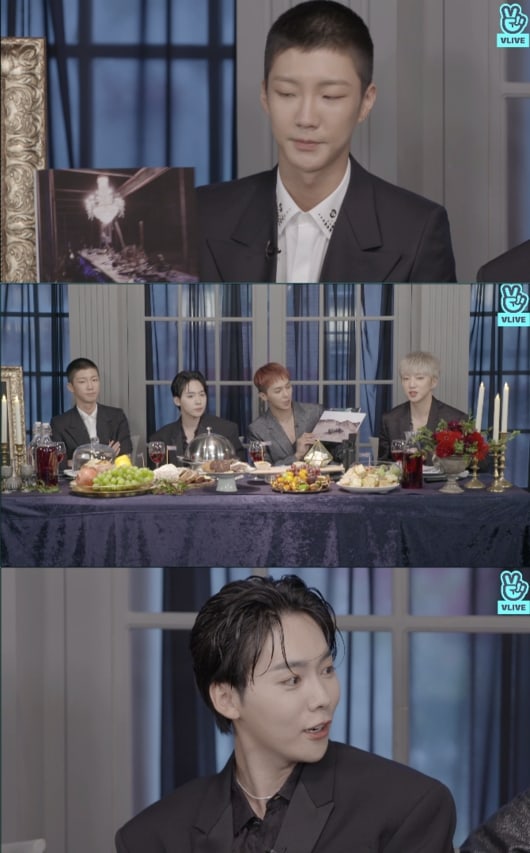 Song Mino spoke about filming in a worn-out shower room with real dancers. Lee Seung Hoon said, “The scene where Mino got stepped on by the dancers was memorable. Why don’t we all try it?”

“I heard that Mino asked to be stepped on,” said Kang Seung Yoon. “According to a behind-the-scenes story, I heard that a dancer was worried. He was going to gently step on him, but Mino asked him to forcefully step on him.” Song Mino explained, “They’re going to feel sorry even if it’s acting. But I told them that because that’s not what’s important.”

Describing the music video, Kang Seung Yoon said, “We shot it like a movie. Didn’t we have many meetings? It’s a music video we worked hard to create that’s the result of edit after edit and six pre-meetings. I hope you’ll look forward to it and watch it a lot.”

As for what they’ve been up to, Lee Seung Hoon revealed, “I think we’re going to be the busiest with preparations for our concert. We’re working with a [live] band.” Song Mino said, “I recently filmed tvN’s ‘New Journey to the West.’ The premiere is coming up. Please look forward to it.” 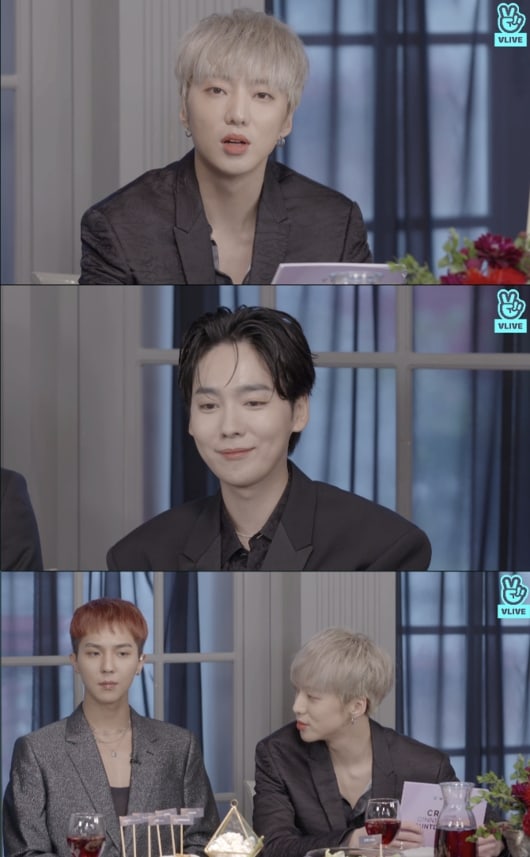 When a fan asked how the group came up with the name “CROSS” for the album, Kang Seung Yoon explained, “We came up with a lot of candidates. We tried this and that, but it didn’t work out. While sitting in the meeting room, I asked, ‘What about ‘CROSS?’ and all of the members said, ‘Nice. Let’s go with that.’ I said that there are four of us and four vertices [on a cross], so we’d be able to convey various meanings and symbolism. That’s how ‘CROSS’ was chosen.”

He continued, “If you look at the track list, all of the tracks include choreography. We emphasized performance this time. Please look forward to our performance.” Kang Seung Yoon also added that he took the pictures for the photo cards inside of the album.

The group was then asked when Inner Circles [WINNER’s official fandom] are the biggest source of comfort for them. Song Mino answered, “There are times when we’re home or when we’re not promoting that we become really deep, feel tired, or get stuck on something. When we then get a chance to communicate with Inner Circles, we realize, ‘Oh, I wasn’t alone.'”

“I definitely feel comforted on stage, and I imagine the moment when I’ll sing the song we made in front of Inner Circles,” said Kang Seung Yoon. “People who make music know this, but I feel the happiest when I imagine this.”

WINNER concluded, “We really worked hard to prepare this album. Please listen to it a lot since we worked hard on it, but don’t skip your meals just because you’re listening to ‘SOSO.'”