The third round of “Queendom” wrapped up with fierce performances!

On the October 24 broadcast, the contestants worked hard to come up with creative stages to top the rankings.

Oh My Girl contemplated about their performance and said they wanted to prepare a song that was completely different from their previous ones. In the end, the girl group chose “Twilight” off their 2018 mini album “Remember Me.”

Jiho suggested, “The lyrics talk about Friday the 13th and Halloween, so how about we do a vampire concept? I also think it’d be good to have a lot of synchronized choreography. Since we showed our beautiful dance lines in the past, I think we need something new in order to show something powerful.”

Lovelyz also began their meeting about their new performance and talked about their concept like Oh My Girl. They agreed to perform a bright song since they previously showed a “girl crush” performance. They decided on “Cameo” from their second album “R U Ready?” Soojung explained, “The lyrics in ‘Cameo’ are good. It captures my feelings while looking at the two main characters, and it’s the perfect set-up to portray this through acting.” 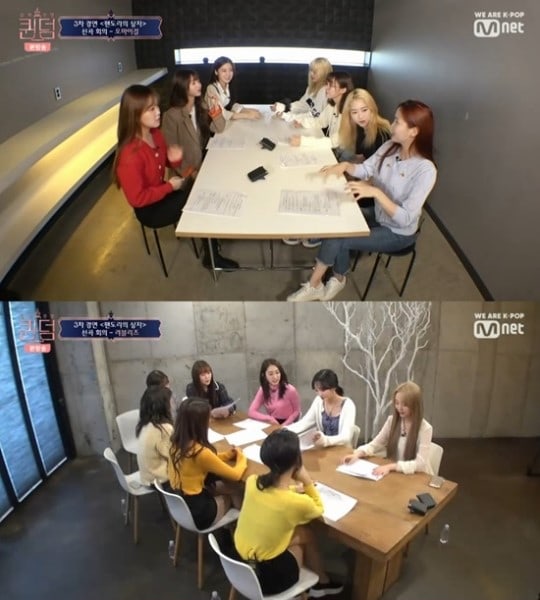 Oh My Girl was the fourth group to perform for the third round. “I suggested this concept,” said Jiho. “You’ll know this if you look at our eyes, but today’s concept is vampires. There are many hidden points to watch out for in our performance. There are many hide-and-seek-like pictures, so please look for them onscreen.”

Watching Oh My Girl’s performance, AOA’s Chanmi commented, “They’re No. 1 in my heart.” MAMAMOO’s Hwasa said “They’re really good at performing” and Moonbyul added, “It was a cool performance. They’re a good group and I could really feel Oh My Girl’s story.” (G)I-DLE’s Jeon Soyeon stated, “They really fit the title ‘master of concepts.’ I was a bit surprised.”

Lovelyz then got onstage and grabbed everyone’s attention with a bright concept. Baby Soul had said before, “I think it’ll be good if it felt like a teen musical.”

The girl group’s performance was lively and lovable. Jeon Soyeon said, “This is really a performance that only Lovelyz can do,” and Oh My Girls’s YooA added, “It looked like their usual appearance. It was natural as if they were wearing their own clothes.”

The final stage of the night was by Park Bom who got recommendations from her fans through a live broadcast. She pondered over the potential tracks such as 2NE1’s “Crush” and her track “Shameful,” before choosing BIGBANG member Taeyang’s “Eyes, Nose, Lips.”

Park Bom was joined by modern dancer Han Sun Chun onstage. His choreography and her voice created a perfect performance, and other contestants raved about how she filled the stage with just her voice. AOA’s Yuna said, “I kept getting chills. It was so good.” Jeon Soyeon said, “I think she shows off more of her charms sitting down and singing versus the six of us performing.” Park Bom, however, commented, “I feel a bit regretful. I want to do better. I just hope I’m not in last place.”

All of the contestants gathered at the studio after the third round was completed. The rankings for the unit round were revealed with MAMAMOO in first, Lovelyz in second, Oh My Girl in third, (G)I-DLE in fourth, Park Bom in fifth, and AOA in sixth place.

The rankings for the third round’s “fan-dora’s box” were also revealed along with the votes from each group’s self-evaluation and the special panel. Lovelyz received 2,000 votes from the special panel and reacted with surprise and joy. Soojung commented, “We won the ‘Queendom Quest’ and chose the special panel after some thought, and I feel proud because I think we did a good job with our choice.”

The final rankings were then announced. Lovelyz came in third place, and Baby Soul said, “I was really worried because we heard comments at the last battle that weren’t so good. Thank you so much. I’m happy.” Kei added, “It was our goal to go up one step at a time, and I feel proud that we’re continuing to achieve that goal.”

MAMAMOO scored second place, and Hwasa said, “I feel happy that we’re just maintaining second place. Thank you so much.” The winner was revealed to be Oh My Girl who achieved their second first-place ranking, and Seunghee burst into tears after hearing the announcement. The remaining rankings included (G)I-DLE in fourth, Park Bom in fifth, and AOA in sixth place.

Oh My Girl chose the cue sheet for the final battle next week and selected the performers in order as AOA, Lovelyz, Park Bom, Oh My Girl, (G)I-DLE, and then MAMAMOO. 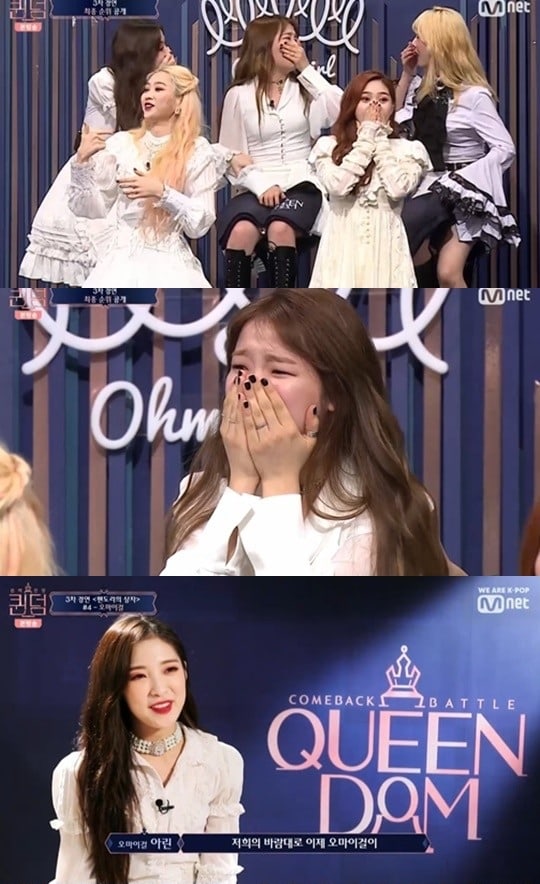