NU’EST appeared on KBS2’s “Yoo Hee Yeol’s Sketchbook” and opened up about their careers and hopes for the future.

The group is in their eighth year since their debut but this is their first appearance on the show. NU’EST spent much of their career as a relatively unknown group, and they talked about their decision to appear on Mnet’s “Produce 101 Season 2” as a turning point in their careers.

Minhyun explained, “We had been releasing albums quite consistently. We worked really hard to prepare, but most often, the results were usually below our expectations. We would perform overseas, but our venues kept getting smaller. We even heard that we couldn’t use in-ear monitors because of monetary issues.” He said, “Hearing that, we thought, ‘At this point, we won’t be able to sing for a long time’ and decided to appear on the survival program.” 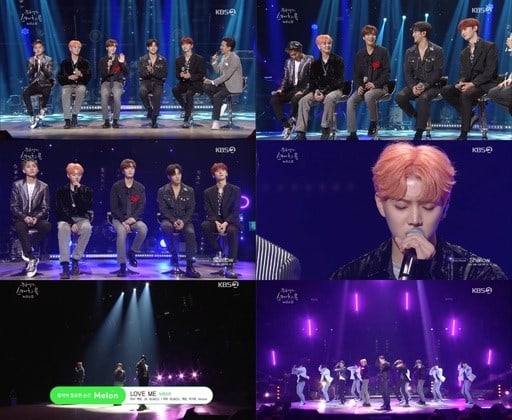 Things have now changed for the group though, and they celebrated their first music show win as a group earlier this year. Talking about how it had taken 2,611 days since their debut, Baekho remarked, “We heard that we hold the record for longest time it took for a music show win.” He added, “JR’s dad bought us all wild pine mushrooms to celebrate, but we later learned that he had used JR’s card to pay for all of it,” making everyone laugh.

Finally, NU’EST was asked what their dreams for the future are. Minhyun replied, “We want to work hard to become better people and singers who gift many people with good emotions through good music.”

The group also performed their new title track “Love Me.” Check it out below!

Don’t forget to check out the latest episode of “Yoo Hee Yeol’s Sketchbook” with English subtitles below.