Ha Jung Woo made a special appearance on SBS’s “Vagabond” in an unexpected way!

During the episode of SBS’s Friday-Saturday drama “Vagabond” that aired on October 25, a piece of artwork created by Ha Jung Woo was featured in a scene that involved an art auction.

In the drama, the painting was described as having been created by artist Kim Sung Hoon, a fictional character. However, viewers were surprised to learn that the real artist behind the work was none other than actor Ha Jung Woo. The actor made his debut as an artist in 2010 and has opened many art exhibits since then. He is said to be influenced by pop art and German expressionism, and his artwork has been given high praise by both art critics and enthusiasts alike. 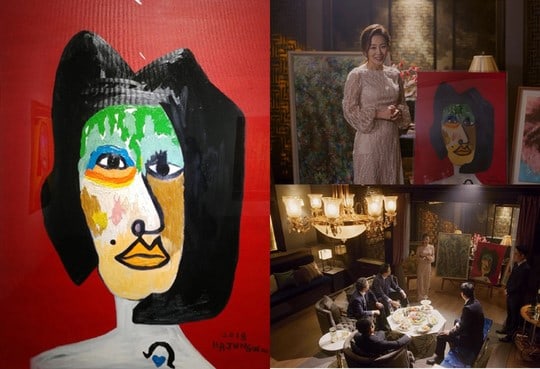 The artwork in the drama was first featured in a gallery in July 2018 and he signed it with “2018 HAJUNGWOO” on the bottom right corner, which is what viewers spotted in the scene. Ha Jung Woo is said to have lent the artwork to the drama at the request of screenwriters Jang Young Chul and Jung Kyung Soon as they’re acquaintances.

A source from the drama explained, “Many viewers who watched the scene were curious about the artwork and people who had gone to the exhibit that featured the artwork recognized it. We wish to thank Ha Jung Woo for allowing us to showcase his artwork.”

Ha Jung Woo
Vagabond
How does this article make you feel?