The winner of “Queendom” has been revealed!

On the October 31 finale, contestants performed in a final round where the first place winner was decided as a result of points from previous battles, the success of their digital songs, and live broadcast votes.

Before the battle, the rankings from the previous battles were revealed. Oh My Girl came in first, MAMAMOO in second, (G)I-DLE in third, Lovelyz in fourth, AOA in fifth, and Park Bom in sixth place.

Expressing confidence in the group’s performance, Seolhyun said with a laugh, “I’m worried that [viewers] won’t be able to see the other teams after us.” AOA opened the final round with “Sorry” and created a Western movie-like performance complete with action scenes by Chanmi.

Lovelyz celebrated their ranking while preparing for the final performance, and they brainstormed costumes and props for the final round. Lovelyz got on stage with “Moonlight” and put on a performance with a dreamlike and alluring vibe.

Explaining her track “Wanna Go Back,” Park Bom said, “It’s a song that I’m singing for me who went through the past.” The artist shed tears while watching video messages from her agency staff members and former 2NE1 member Minzy. Park Bom and the dancers moved viewers with a touching song and performance reminiscent of 2NE1.

The rankings for the scores of their final tracks, which were released online last week, were then revealed. MAMAMOO came in first, Oh My Girl in second, (G)I-DLE in third, AOA in fourth, Lovelyz in fifth, and Park Bom in sixth place.

Oh My Girl gathered for a meeting prior to their performance where Seunghee said, “I hope Oh My Girl will be remembered on ‘Queendom.'” The group showed off their powerful side with “Guerilla.”

Describing her self-produced track “Lion,” (G)I-DLE’s Jeon Soyeon said, “I think this is the best song out of the ones I’ve worked on, and I like it.” She expressed gratitude towards the members who always support her, and the group showed off a colorful, majestic performance.

MAMAMOO was the last performance of the night and showed strong confidence in their track. Hwasa said, “I think it’s the best out of MAMAMOO’s songs.” The girl group performed “Destiny” and mesmerized viewers with their powerful vocals and performance.

MAMAMOO and Oh My Girl were named as the two finalists for the No. 1 spot. With the addition of the live broadcast votes, MAMAMOO was crowned as the winner of “Queendom.”

MAMAMOO cried while giving their acceptance speech, and Oh My Girl also celebrated their second-place ranking by expressing their thanks. 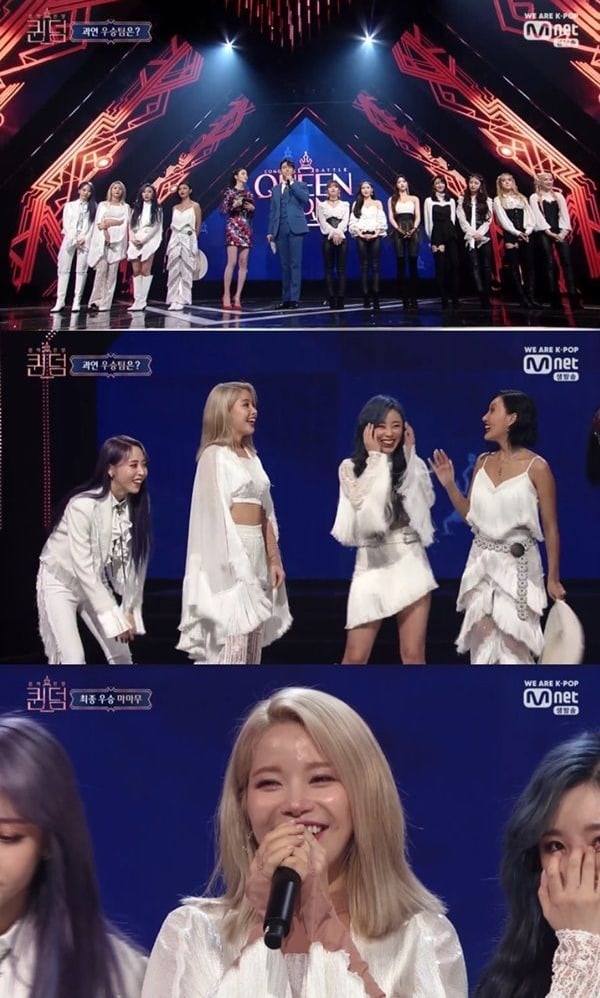 What did you think of “Queendom”?