KBS’s Wednesday-Thursday drama “When the Camellia Blooms” has been receiving praise from its viewers as it shows how Dong Baek (Gong Hyo Jin) comes to love and appreciate herself with help from Yong Shik (Kang Ha Neul), who helps her find her self-worth by showing her unconditional love.

Dong Baek used to suppress her emotions because she put others before her. However, she finally realizes that withholding herself from expressing does nothing good for her, and she has finally decided to say her thoughts out loud. Here are three moments in which Dong Baek finally stepped up to the world and brought satisfaction to viewers.

1. “You should be careful about who you choose to mess with.”

While Dong Baek used to think that it’s easier to run away instead of facing a situation, she realizes that “there is no exit for those who run away.” Afterwards, she decides not to back down no matter what kind of situation she finds herself in.

Her determination is clearly shown when she tells the drunk person she encounters in a dark, narrow alley to be careful who he messes with. This marked Dong Baek’s first official counter-attack against the world, from which she used to run away. 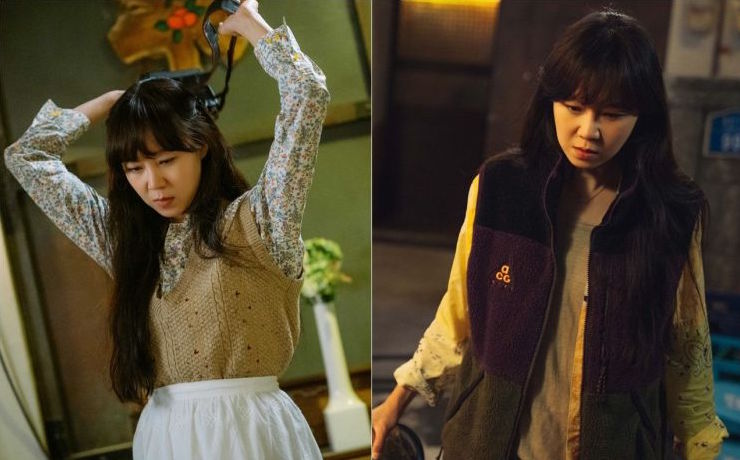 After Dong Baek decides to live her life by doing the things she likes without caring about what others might think of her, she becomes more confident. She bravely walks down the market in a red dress, red shoes, and wears red lipstick, which she could’ve never done before.

When Dong Baek witnesses Hyang Mi (Son Dam Bi) being threatened by Nak Ho (Heo Dong Won), the owner of a bar they used to work together at, Dong Baek stands by Hyang Mi. Nak Ho threatens Hyang Mi with her life, and Dong Baek stands against him by stating that she will call the police on him if Hyang Mi were to ever disappear.

When Nak Ho does not stop and almost physically abuses Hyang Mi, Dong Baek smacks his head with a bowl. Afterwards, Dong Baek shouts, “I have a temper. She has a temper, and everyone has a temper.” For the first time in her life, Dong Baek was able to express what she had been holding in during all those times that she was looked down by people.

After Dong Baek goes through these revelations, even Noh Kyu Tae (Oh Jung Se), who used to bully her in the past, noticed the change in her personality and started treating her differently. Dong Baek no longer lets anyone push her around, and this is especially so for anything related to her son Pil Gu (Kim Kang Hoon).

When Dong Baek finds out that a photographer secretly took photos of Pil Gu to use as evidence for rumors about Kang Jong Ryul (Kim Ji Suk), she throws the camera to the ground and says, “Don’t touch him or you will all die.” Dong Baek does not stop here. She calls Kang Jong Ryul and says, “Who are you to mess with Pil Gu’s life? He is your child. Don’t try to be sly, just protect him with all you’ve got.” Anticipation is high as viewers are curious to find out whether or not Dong Baek’s growth as a person will help with catching the serial killer.

“When the Camellia Blooms” airs every Wednesday and Thursday at 10:00 p.m. KST.