“Psychopath Diary” is an upcoming comedy thriller about a man named Yook Dong Shik (Yoon Shi Yoon), a timid pushover who happens to witness a murder. While attempting to flee the scene, he suffers an accident that causes him to lose his memory. When he wakes up and discovers the murderer’s diary — which describes his crimes in detail — in his hands, Yook Dong Shik becomes convinced that he is a psychopathic serial killer.

The newly released stills reveal Yook Dong Shik and Shim Bo Kyung’s (Jung In Sun’s) first meeting on the road through a sudden accident. In the stills, Shim Bo Kyung is holding tightly onto the car steering wheel while looking startled with her eyes wide open. Meanwhile, Yook Dong Shik appears to be in danger as he lies passed out in the middle of the road looking frightened and pale as a ghost. Next to him, Shim Bo Kyung and Heo Taek Soo (Choi Sung Won) are at a loss as to what to do. 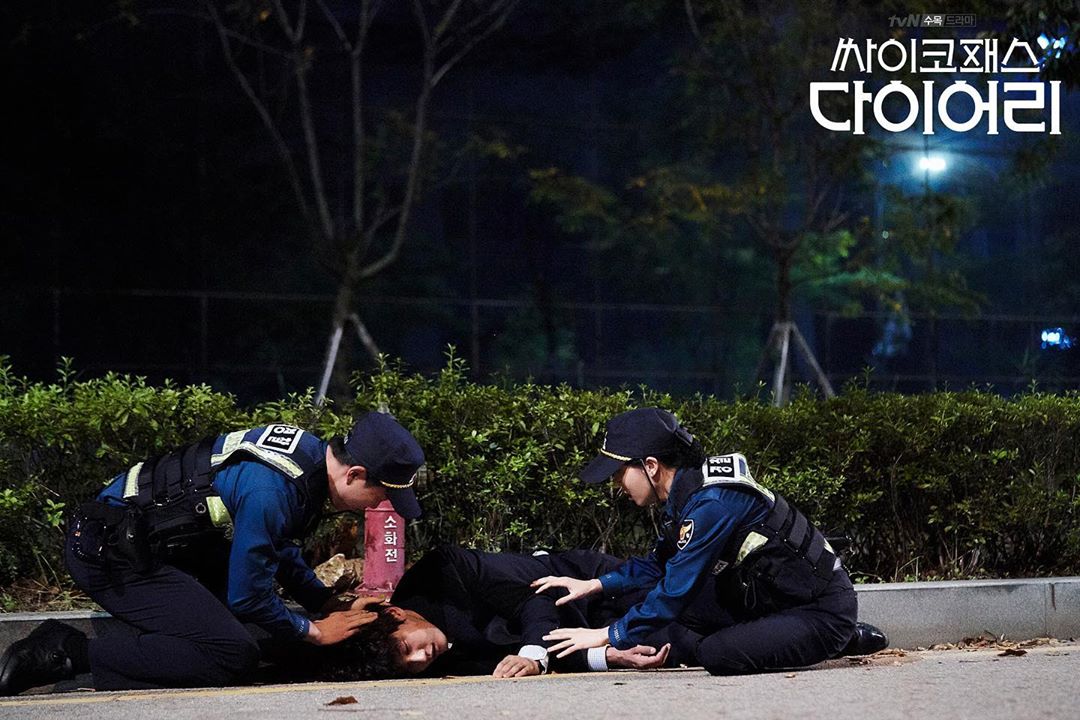 Previously, Jung In Sun had picked this moment as the scene she most anticipated, sharing, “I think that this scene has [all the elements of] thriller, comedy, and fantasy.” Viewers are also highly anticipating her upcoming chemistry with Yoon Shi Yoon.

The production team for “Psychopath Diary” shared, “In the story, Yoon Shi Yoon’s and Jung In Sun’s [lives] will unintentionally be intertwined starting with their dangerous first meeting. Please look forward to and show lots of interest for the story that will unfold amidst the secrets and suspicions surrounding Yoon Shi Yoon, the world’s biggest pushover who mistakenly believes that he’s a psychopathic serial killer, and Jung In Sun, the neighborhood cop with a bright investigative sense.”

Yoon Shi Yoon
Jung In Sun
Psychopath Diary
How does this article make you feel?