Ha Ji Won will be warming viewers’ hearts with a healing energy in the deeply emotional melodrama “Chocolate.”

JTBC’s “Chocolate” will premiere on November 29, following the end of JTBC’s “My Country.” Still cuts of Ha Ji Won show her perfectly embodying her role as Moon Cha Young, a passionate chef with a positive energy.

“Chocolate” is about Lee Kang (played by Yoon Kye Sang), a neurosurgeon who is as cold as a scalpel, and Moon Cha Young (played by Ha Ji Won), a passionate chef who touches people’s hearts with her food. The two reunite in a hospice ward and heal each other’s wound through cooking. Fans are excited about the reunion of director Lee Hyung Min and writer Lee Kyung Hee after they worked together on the 2004 drama “I’m Sorry, I Love You.”

With Yoon Kye Sang and Ha Ji Won as the leads, they are a “Dream Team” of producing emotion. Fans are already looking forward to the creation of a melodrama with a deeply insightful and touching story on top of the emotional synergies of the two actors that will melt our hearts. 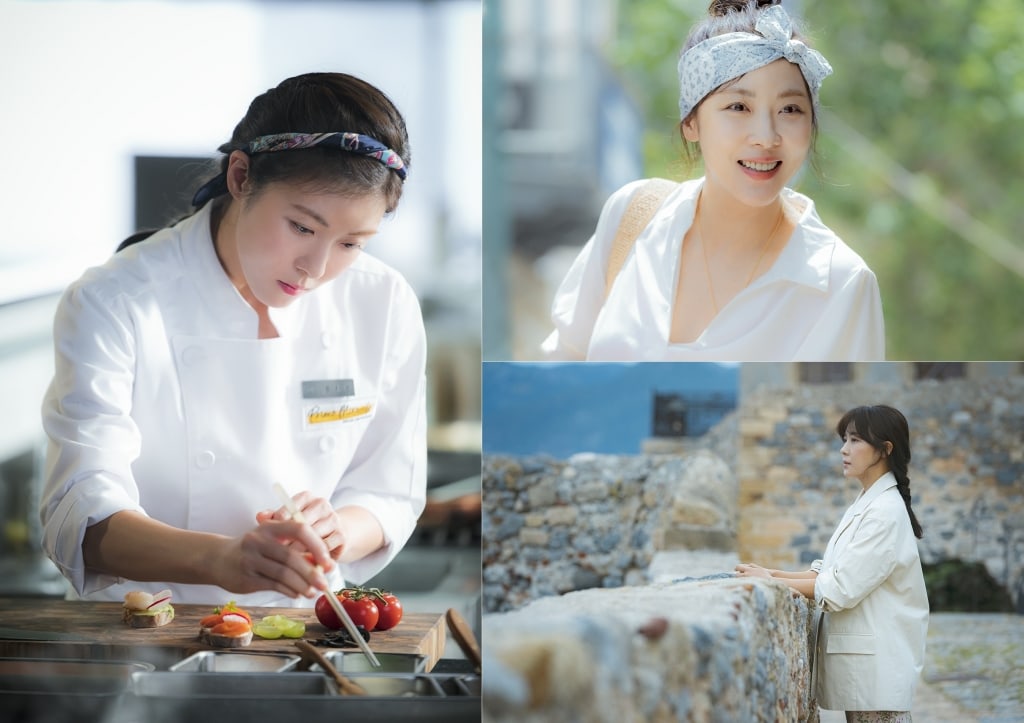 Ha Ji Won, who is returning as the passionate chef Moon Cha Young, warms our hearts with a bright smile in a newly released photo. Moon Cha Young is a character who puts her heart into each dish she makes. In another still, she has a serious expression while preparing a dish. Ha Ji Won perfectly depicts Moon Cha Young with her smile that is brighter and healthier than the sun in Greece. But beneath the bright appearance, there is loneliness in her eyes that makes us wonder what her inner pain is.

Moon Cha Young is an Italian world cooking competition participant and talented chef. She is full of positive energy and has a sweet smile, but she can’t hide her fiery temper in front of injustice.

Her childhood memory of a warm meal given by Peter Pan, a boy she met at a small restaurant near the beach, ultimately led her to become a chef. Ha Ji Won shared, “Moon Cha Young is full of love. Despite the pain she carries, she still shares her all with others. Since she is a chef, she heals others with a warm meal.” She expressed her affection for the character as she went on to say, “It makes me wonder if there are people like her in this world.”

She shared that before they started filming, she learned how to cook Italian and Korean food, as well as how to bake. She added, “I learned to understand the heart of a chef and ended up loving to cook myself. I also learned about happiness. Because of this, I was sincerely happy to cook while I filmed the drama and I shared that happiness.”

Ha Ji Won
Chocolate
How does this article make you feel?