Im Chang Jung and his wife have welcomed the birth of their child!

On November 9, Im Chang Jung took to his personal Instagram account to reveal that his wife had given birth. He wrote, “He can’t talk but he’s all grown up already. Weighing 4.1 kilograms, he and his mom are in good health. Even without me, I can make a basketball team now. Let’s go. We’ll raise him well to be someone who contributes to the country.”

Earlier in the day, Im Chang Jung had responded to reports that his wife had already given birth to a child on November 8. In a now deleted post on Instagram, he had written, “What. The child isn’t even born yet. Did they [reporter] want a promotion that much? Reporter, I’m sorry. We’re still in the middle of it. Please pick your article titles carefully.” 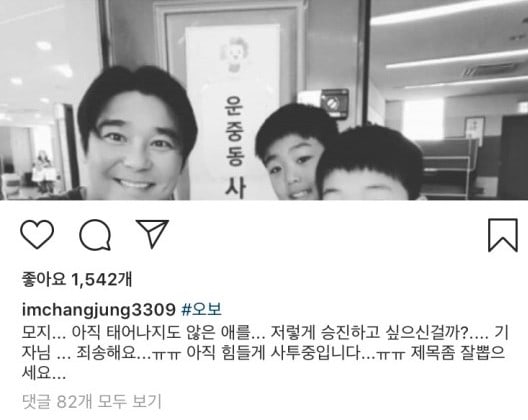 Im Chang Jung married a non-celebrity in 2017, and began raising his three sons from his previous marriage with her. That year, they welcomed the birth of their first child together, a son, and they now have a new addition to the family.

Congratulations to Im Chang Jung and his family on the good news!