HyunA and DAWN have shared more details about their loving relationship!

On the November 9 episode of JTBC’s “Ask Us Anything,” the couple appeared as guests to promote their new solo tracks “FLOWER SHOWER” and “MONEY.”

During the show, Super Junior’s Kim Heechul asked HyunA when she had noticed DAWN’s thoughtfulness in their relationship. HyunA shared, “I’ve only cried once after receiving a gift, and it was from DAWN. There was a refrigerator that I had wanted. Since our house has more than one floor, I thought it would be convenient to have a mini-fridge upstairs, even if we already had one downstairs. I really wanted a mint-colored one, so I began looking for one, but then I had to go overseas because of my schedule. During times like that, we don’t contact each other much because we’re both busy.”

HyunA went on, “But when I came home all tired from my schedule, DAWN had made food [for me], and when I went upstairs, I saw the fridge sitting there. I was too embarrassed to express how happy I was, so I secretly went to open the fridge when I was alone, and there were flowers inside. There was also a letter inside, which said, ‘You must be really tired from your schedule. Even though there isn’t anything I can do for you, I will keep taking good care of you.’ It was really short and sweet.” 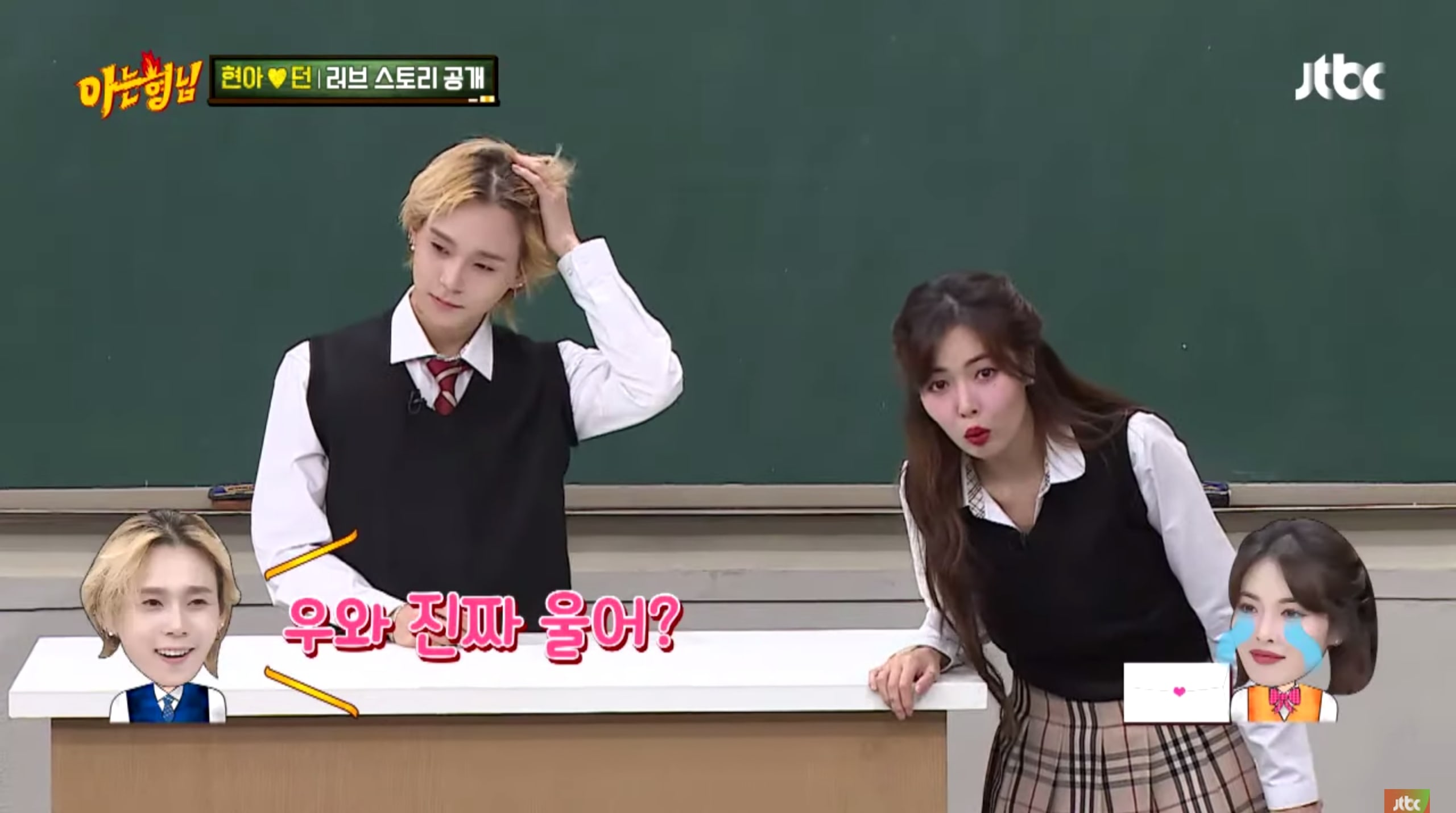 HyunA then made everyone crack up by revealing an unexpected twist. She added, “On top of that, there was also a necklace that I had really wanted,” and the cast members began laughing as they implied that it was ultimately the gift of jewelry that had moved her to tears.

However, HyunA managed to calm everyone down and explain, “What I cried at was the letter, and I didn’t know the necklace was inside. But then DAWN came upstairs and asked, ‘Are you really crying?’ and he took the necklace out of the flowers and put it on for me.”

Seo Jang Hoon asked DAWN with a laugh, “The necklace was more expensive than the fridge, right?” and DAWN confirmed that it was. 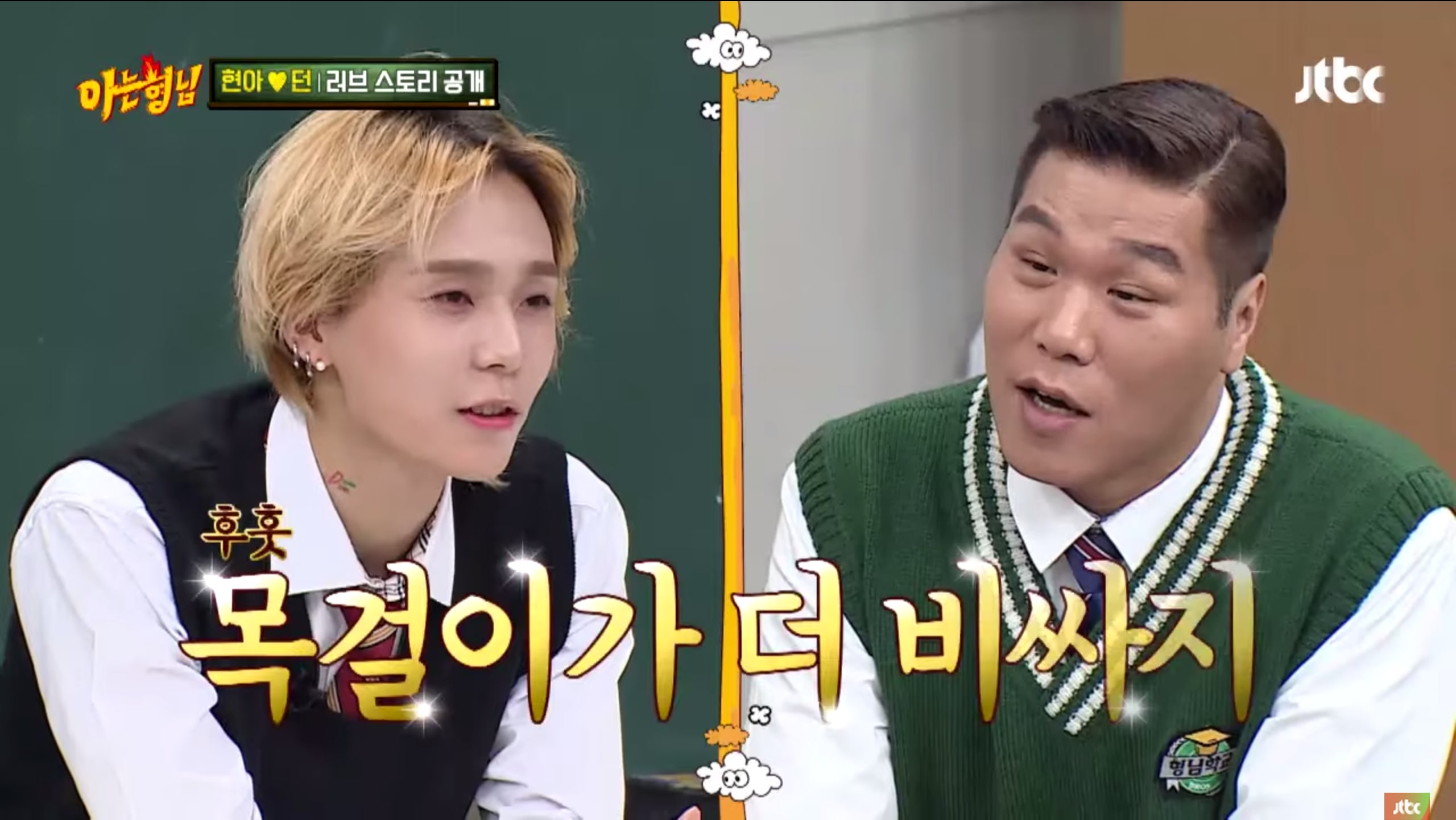 DAWN also talked about a sweet gesture from HyunA, revealing, “When I was younger, I was such an introvert that I didn’t have a lot of friends in elementary school. So my dream was to have a birthday party in a hamburger shop. Before I turned 20, I’d never had a birthday party with my friends.”

“The time I was most moved was when, after we started dating, HyunA threw me a birthday party,” DAWN continued. “She called all of our friends who knew we were dating and set up a party. The thing is, though, our birthdays aren’t that far apart. They’re only five days apart, but instead of throwing herself a birthday party, she threw me one instead.” 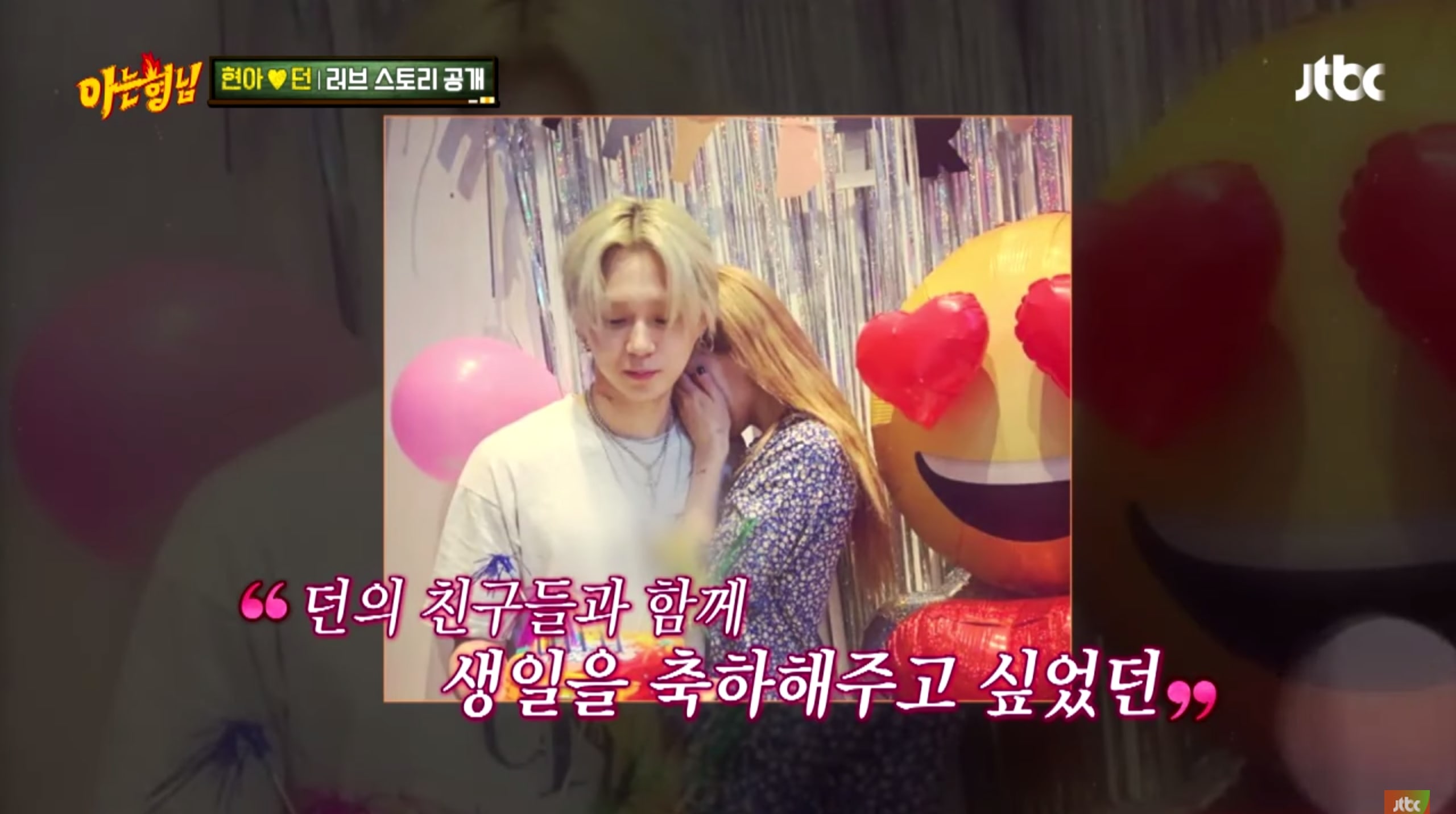 Expressing envy of their sweet relationship, the cast members also asked the two singers if they ever fight, considering that they’ve been dating for close to four years. HyunA answered, “The funny thing is, I’ll always start arguing, thinking we’re getting into a fight, but the fight never actually happens. He accepts whatever I say or do.” DAWN explained, “I don’t really get angry.”

When asked if she has ever gotten angry with DAWN, Hyuna responded, “Yes, I have. Stuff like ‘Everyone always says I like you more [than you like me].’ But because he’s so affectionate, when there are no cameras, he bugs me so much. He starts talking in a cutesy voice, he does so much aegyo, and he peppers me with kisses.” 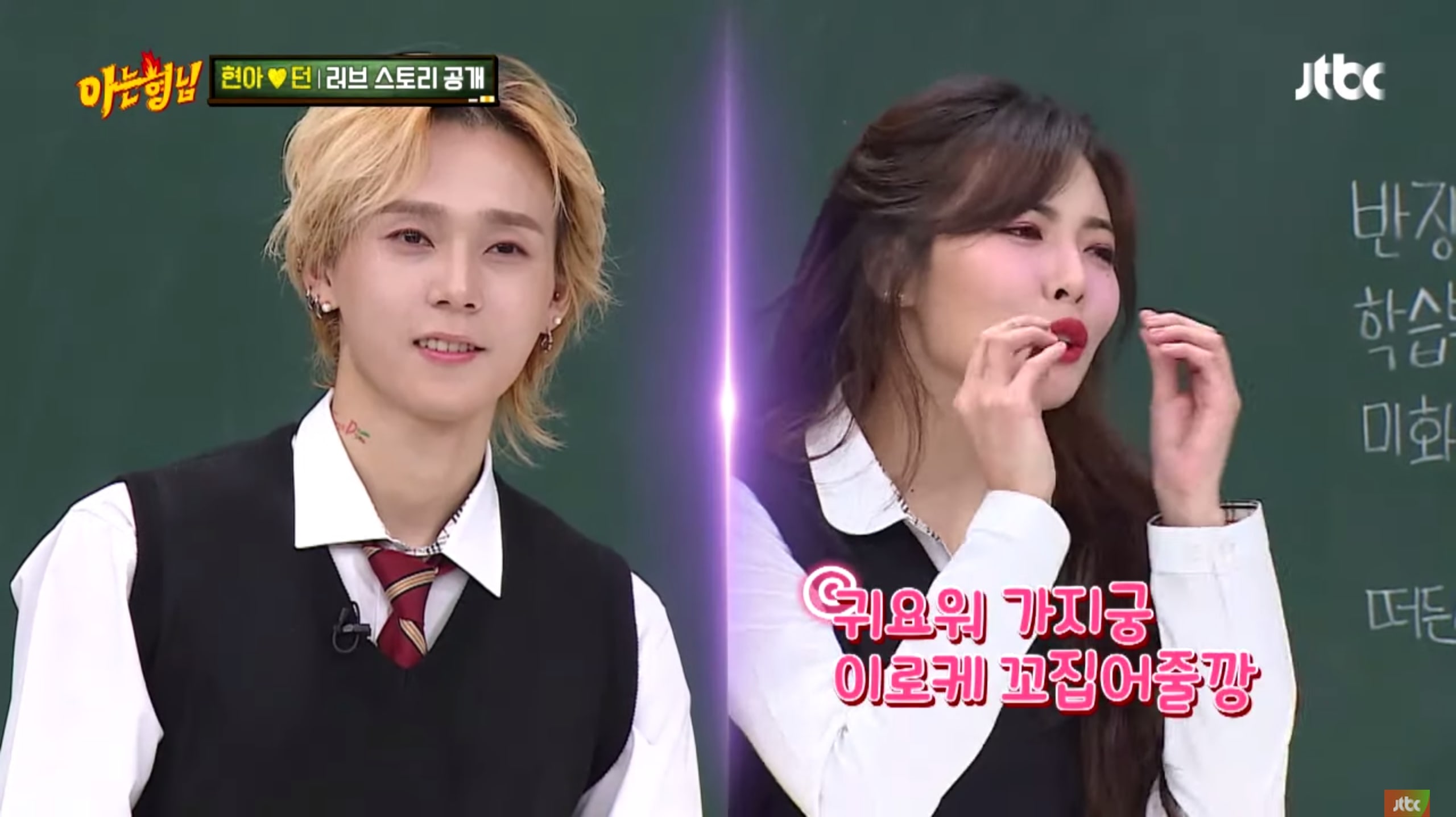 Later, while discussing DAWN’s disinterest in food, Heechul asked what he ate earlier that day. HyunA suddenly interjected, “What should we eat later?” After a long pause, DAWN answered, “I just eat whatever HyunA wants to eat. Then it tastes good.”

Heechul then asked the couple what they call each other and if DAWN calls HyunA noona, given that she’s older than him. Immediately, HyunA sweetly answered, “Honey.” 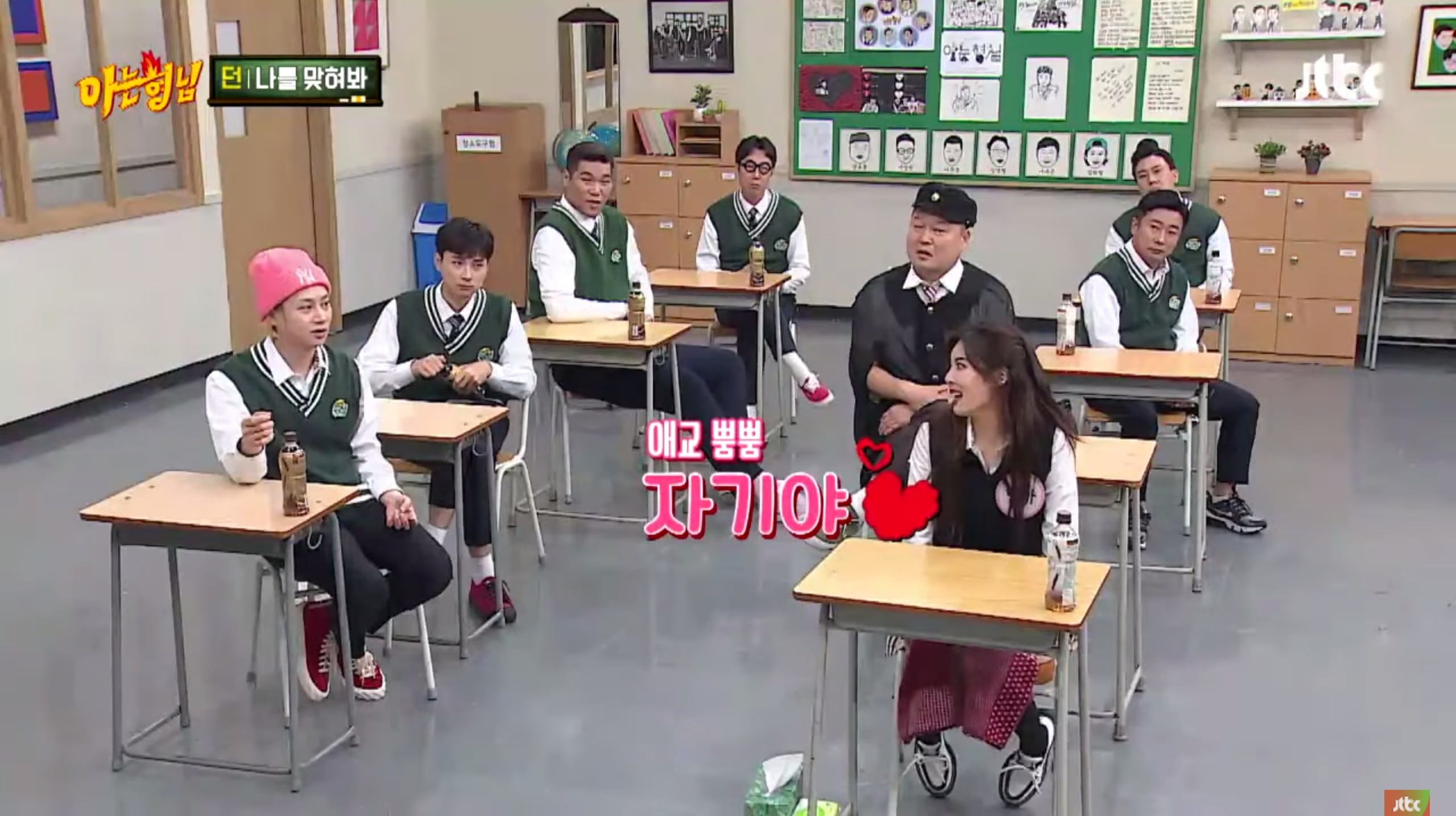 Dawn
Knowing Bros
HyunA
How does this article make you feel?