4 Questions Left To Be Answered In Final Episodes Of “Vagabond”

With only two episodes left to go, SBS’s “Vagabond” is headed towards its finale!

The Friday-Saturday drama achieved its best ratings yet with Episode 14, which aired on November 9, and took the No. 1 spot in its time slot. Despite the final broadcast being pushed a week later due to baseball coverage, viewers are eagerly waiting to see how the shocking events of the previous episode will conclude. 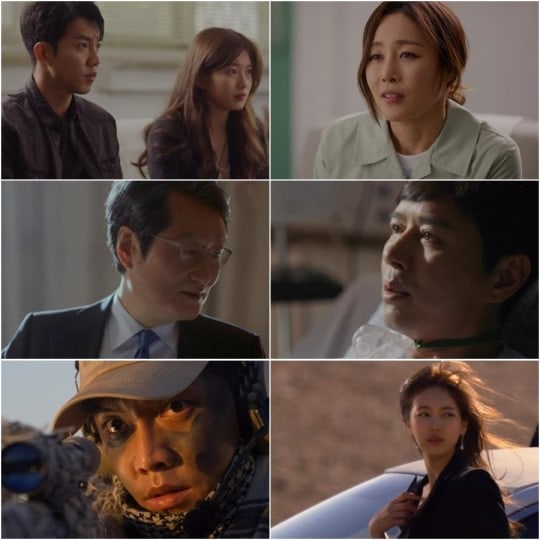 Here are four points to watch for as “Vagabond” comes to an end!

Jessica Lee (played by Moon Jung Hee) confronted Cha Dal Gun (played by Lee Seung Gi) and Go Hae Ri (played by Suzy) at the detention center after being imprisoned under charges of illegal lobbying and revealed that she did not give the order to down the plane involved in the crash at the center of the drama. She denied the claims against her by further stating that Michael did not kill himself and that the reason she held onto Cha Hoon’s video was to investigate the person who killed Michael. Jessica then requested the help of the pair to look into the terrorism that occurs in the video and shared the truth of Oh Sang Mi (played by Kang Kyung Hun), saying, “What will you do if the truth you know isn’t actually the truth?”

With Jessica Lee’s words being circumstantial as Oh Sang Mi’s whereabouts are hidden, viewers are curious whether Cha Dal Gun and Go Hae Ri will form an unexpected alliance to find the real culprit with Jessica Lee, who had been the leading suspect for backing the terrorists up until now.

Will Yoon Han Gi be won over by Hong Soon Jo?

Jung Gook Pyo (played by Baek Yoon Shik) was put in a difficult situation after Cha Dal Gun told him to beg for forgiveness in front of the citizens and mark himself as a backer of the terrorists. He then called his faithful servant Yoon Han Gi (played by Kim Min Jong) to the Blue House, who told him, “I will take responsibility.” However, after seeing whiskey and charcoal briquettes in his car, he cried in anguish at the betrayal of Jung Gook Pyo, whom he had believed in and served all this time.

This was all the plan of the power-hungry Hong Soon Jo (played by Moon Sung Geun), who approached Yoon Han Gi and said, “You just need to reveal the hidden account in Singapore with the $500 million from John and Mark. An empty shell like Jung Gook Pyo will disappear, and a new history will open for this country.”

Hong Soon Jo also called Cha Dal Gun and the bereaved families for an emergency press conference, where he presented a transcript of a conversation in which Jessica Lee stated that she had given Jung Gook Pyo 500 billion won (approximately $427.8 million). He then declared, “The crash of B357 was tied to defense corruption, and the figure at the center was not Chief Yoon Han Gi, but President Jung Gook Pyo.” Tensions are high as viewers are anticipating whether Yoon Han Gi will turn his back on Jung Gook Pyo in favor of Hong Soon Jo.

Will the mystery behind the first scene of Cha Dal Gun shooting Go Hae Ri be revealed?

Cha Dal Gun and Go Hae Ri met for the first time as a bereaved family member and an employee for the embassy, but after forming a half-reluctant partnership to uncover the truth behind the incident, their relationship deepened into a romantic one. However, in the opening scene of “Vagabond,” the two were shown in the northern African kingdom of Kyria, with Cha Dal Gun fully-equipped as a camouflaged special agent, and Go Hae Ri showing up accompanied by several bodyguards. Cha Dal Gun was surprised to learn that the target he had been waiting to assassinate was Go Hae Ri, but the scene ended with him pointing the muzzle of his gun at Go Hae Ri with his finger on the trigger, sparking viewers’ curiosity as to what could have happened.

What is the identity of the forceful presence Samael?

Samael has been a strong presence in the minds of the main characters since the first episode, but has remained a figure shrouded in mystery. In Morocco, Samael threatened the life of Jerome (played by Yoo Teo) when he didn’t follow orders, and Samael has been pulling the strings behind Hong Soon Jo, who betrayed Jung Gook Pyo and staged a coup d’état. Tensions are at their max as viewers wonder if Samael will turn out to be the true incarnation of evil.

Production company Celltrion Entertainment stated, “Watching for the reversed relationships between the characters will be a crucial point to look out for in the final episodes. Please watch to the end to see how the twists will play out.”

Vagabond
How does this article make you feel?