Na Young Suk is pleading with people to unsubscribe from his YouTube channel following a big promise he made.

The famous producing director recently promised that he’d send Eun Ji Won and Lee Soo Geun to the moon if his YouTube channel reaches a million subscribers. With many people joining the fun by hitting subscribe on the channel, it reached 1 million subscribers on November 19 and the production team said they’re looking into ways to make the promise come true.

In his live show on November 20, Na Young Suk said, “They say that you get a Gold Play Button when you reach 1 million subscribers. It hasn’t been long since our channel hit the milestone, but it came right away. It’s like they’d already had it prepared.”

“It seems like a scheme from Google,” he continued. “I want to ask something small of you. I said that we’d go to the moon if we surpassed 1 million subscribers. I said that we’d go if we reached 1 million by our last show, but there’s still 48 hours left. It costs 400 billion won [approximately 341 million dollars] for one person to go to the moon, and two people would be 800 billion won.” He added with a baffled look, “And if I were to go too…” 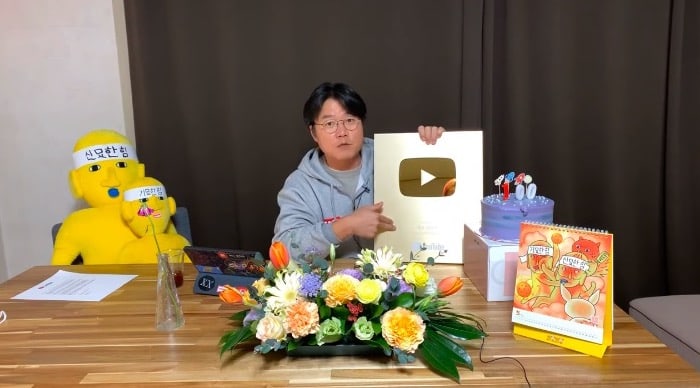 He said, “Of course, we have to go to the moon. You subscribed with that intention. So I have a small request. I’m starting a small campaign today. It’s called ‘If you love me, please unsubscribe.'”

He continued, “They say that we couldn’t even get a loan for that amount if we used tvN as collateral.” Na Young Suk then promised that if people unsubscribe, he will continue to work hard on the show. “I beg of you,” he said. “Show your love by unsubscribing.”

Lastly, he said, “If the 1 million subscribers cancel their subscriptions, then I’ll do something else. If you tell us to do a plunge in the Antarctic, that would be easier than the moon. Eun Ji Won, P.O, Kyuhyun, Song Mino, and Lee Soo Geun already unsubscribed. I hope that you will all show your love by unsubscribing. Pengsoo is popular lately. Please subscribe to Pengsoo instead.”

Thankfully for Na Young Suk, the channel is now down to 997,000 subscribers!