As K-pop gets more popular worldwide, there’s a curious trend happening: more Korean artists are taking things back to their cultural roots. A number of recent K-pop releases have included recognizably East Asian elements (NCT’s Ten’s stunning, instrumental “Dream in a Dream” is a gorgeous example), and many artists have been incorporating more elements of specifically Korean culture into their songs and MVs. While older K-pop acts such as Seo Taiji And Boys sampled from traditional Korean music, this practice all but disappeared until more recent years. Now, we’re seeing more hanbok-inspired outfits, sampling of folk melodies, and the fusion of traditional Korean instruments into genres ranging from pop to hip-hop. So here are 12 songs that show how gorgeous, lit, and crazy cool K-pop can be when it embraces its Korean roots! 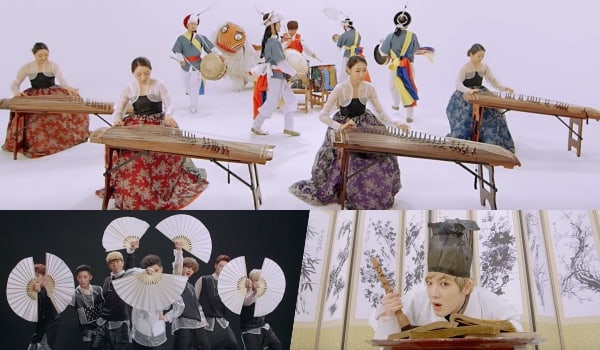 ToppDogg’s “Arario” goes all out when it comes to incorporating traditional Korean culture into both the song and the music video. The music is fused with Korean instruments, such as the gayageum (the stringed instrument that the women are playing in the top photo of the collage above), various percussion instruments, and a piri, or bamboo flute, which is prominent in the track’s last 30 seconds. The MV showcases traditional folk performance styles, like Korean mask dances and pungmul (also shown in the top photo of the collage), which includes dancing, drumming, and singing. ToppDogg’s use of Korean hand fans and traditional masks accentuate the cultural theme, and even the song’s title is a reference to the folk song “Arirang,” considered the national anthem of Korea.

After achieving massive success worldwide, BTS brought things back to their Korean roots with tracks like their 2018 rap “Ddaeng” and their more high-profile hit “IDOL.” In addition to African-inspired beats, “IDOL” uses a rhythm found in pansori, a traditional style of Korean storytelling set to music with a drum. “IDOL” also includes Korean instruments such as the kkwaenggwari (brass gong), gakgung (horn bow), and janggu (traditional drum), and the group makes use of the phrase “eolssu,” an exclamation of encouragement that is traditionally used in pansori, on the chorus. But BTS doesn’t stop there: the circular leaping in their choreography is derived from folk pungmul dance, and the MV is full of cultural references, from the traditional architecture to the members’ sleek hanbok-inspired clothes. Hopefully the success of “IDOL” is paving the way for future K-pop acts to embrace more Korean sounds!

“Shangri-La” is a masterpiece, largely because it is so full of classical Eastern elements: the members of VIXX wear gorgeous, traditionally-influenced outfits as they dance their way through a breathtakingly aesthetic music video that draws inspiration from an old Chinese fable called “The Peach Blossom Land” (which is, in fact, the song’s Korean title). Plus, the music is layered with the gayageum, a traditional Korean stringed instrument that is most noticeable in the song’s distinctive intro. And, of course, we can’t forget the stunning choreography that creatively incorporated the use of traditional hand fans. If you can’t get enough of “Shangri-La” in the MV below, definitely check out VIXX’s 2017 MBC Gayo performance, in which they fully embraced the traditional theme! 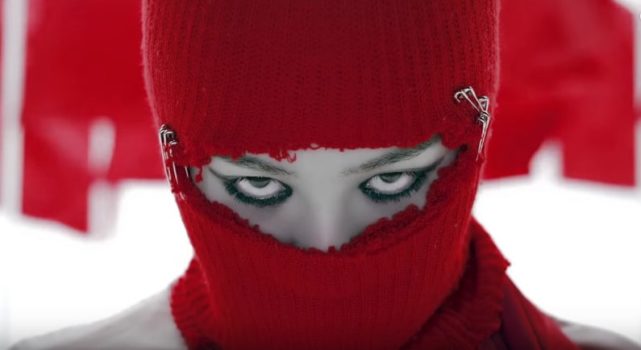 “Niliria” was released in 2013 as part of G-Dragon’s “Coup d’Etat” album, and it blends samples of a traditional Korean folk song by the same name into its hip-hop vibe. You can hear the folk music especially in the song’s intro and its bridge (starting at 1:57 in the video below). Furthering the cultural fusion of hip-hop and Korean folk, G-Dragon decided to feature the legendary American artist Missy Elliot on the single. Check out their lit performance from K-CON 2013: 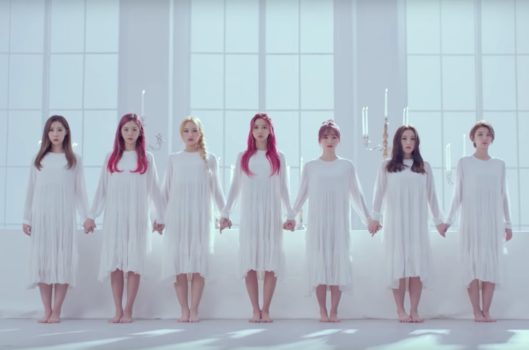 DreamCatcher infuses their characteristic rock sound with a flute melody on “PIRI,” and the result is as haunting as we would expect for a track from an EP titled “The End of Nightmare.” The piri is a traditional Korean wind instrument, and while the conspicuous flute tune in DreamCatcher’s song is higher-pitched and clearer than the bamboo piri, the melodic reedy sound blended into the rock music of the chorus is more like the traditional piri sound.

MONSTA X’s latest hit also incorporates traditional elements in its melody and its music video. Gorgeous hanbok-inspired outfits accentuate the group’s characteristic knife-like moves in this explosive choreography. But what really makes “Follow” so uniquely lit and infectious is the trumpeting, catchy tune that pulls you in at the song’s very opening and keeps you hooked throughout: it’s from the taepyeongso, a traditional Korean wind instrument. 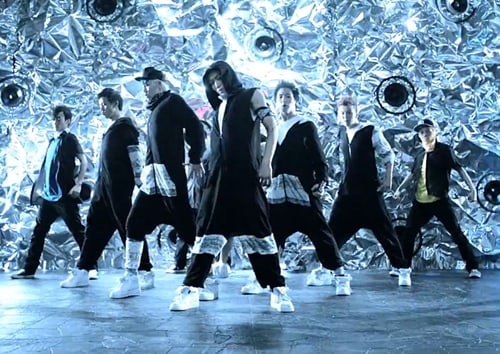 While it is mainly a hip-hop track, B.A.P’s “No Mercy” brings traditional influence into its dance break (at 2:36 in the music video), when the song utilizes samul nori, a type of Korean folk percussion, for its rhythm. Samul nori includes the use of four different instruments, two drums and two gongs, which can plainly be heard in “No Mercy” as the B.A.P members perform choreo with some traditional-inspired elements, like when they leap in the air in a circular formation. To add to its cultural depth, the song also includes raps in the Korean dialect from the Gyeongsang region in southeast Korea. 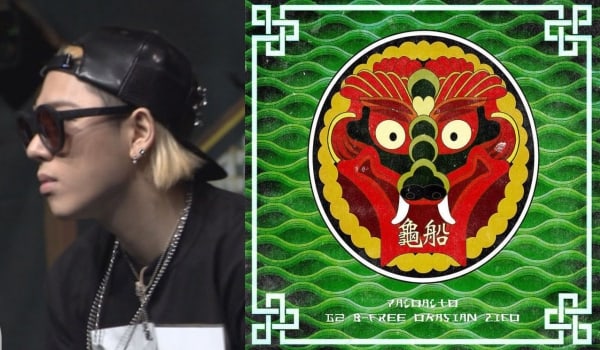 “Turtle Ship” was produced by Block B’s Zico (who raps alongside Okasian and others on the song’s remix) for “Show Me The Money 4.” The song samples a backtrack of traditional instrumentals, and is even named after an important symbol of Korean culture: the turtle ship was a type of warship designed by the esteemed Korean Admiral Yi Sun Shin in the 16th century, and was used to fight off Japanese naval attacks. 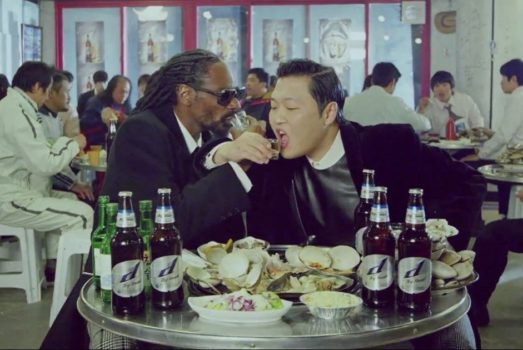 Yes, seriously. Funny and outrageous though it may be, PSY’s alcohol-infused “Hangover,” a song about drinking and partying it up way too much, actually relies heavily on some Korean instruments: in addition to the traditional percussion sounds, the horn-like taepyeongso also features prominently in this one. Plus, the MV is a walkthrough of some beloved modern Korean spaces such as restaurants, convenience stores, karaoke rooms, and spas. 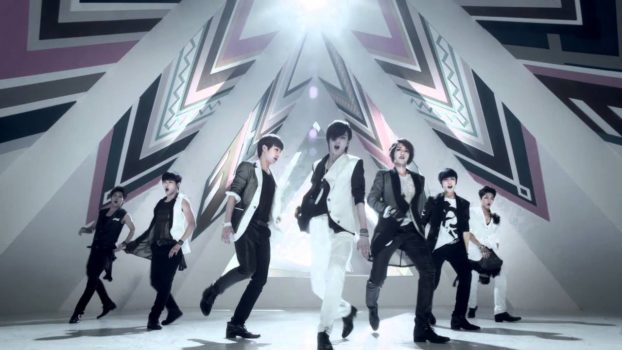 The cultural influence in INFINITE’s 2012 hit “The Chaser” is subtle, yet essential to giving the song the unique sound that earned it several awards and much love. The high-pitched noise soaring over the song’s intro and raps is a string instrument called the haegeum, which lends it a slight traditional feel. The pre-chorus also makes use of an old Korean rousing chant (the phrase “eogiya diyeoracha” around the 36-second mark in the MV below) that is also used in some Korean folk music (like this boating song).

“Fiancé” is experimental and eclectic in the best possible way, as WINNER’s Song Mino brings together Korean music from across the ages. He samples from the 1969 trot song “Soyangang Maiden” (the part found in the intro of “Fiancé” can be heard at the 44-second mark here) in addition to pulling in traditional Korean instrumentals. Lyrically, Mino uses wordplay and cultural references left and right, including in the song’s Korean title: anaknae is an old-fashioned word for “woman” that specifically refers to another man’s wife (scandalous, Mino!). In the MV, Mino dons various traditional outfits, including some royal wedding pieces from Korea’s Joseon Dynasty, as he searches for his lover among women dressed in seductive, red versions of hanbok.

There’s no better way to round this list out than with a full-blown party in a palace, and the MV for ONEUS’s “LIT” builds up to just that. The track is a walkthrough of Korean culture, as the ONEUS members traverse different palace settings in a variety of traditional robes and hanbok-inspired outfits. The gayageum string instrument plays a prominent melody in the backtrack, giving the song its catchy, distinctively Korean feel, and the lyrics make use of some of the same older phrases as other songs on this list, such as “niliria“ and “eolssu.” The MV is a full cultural celebration complete with folk dancers, Korean drums, and hand fans. We’d say the ONEUS members earned their spots on that throne!

Hey Soompiers, which of these traditional-inspired songs or MVs is your favorite? Which K-pop artists do you want to see try a traditional concept next? Let us know in the comments!