Seolhyun shared a behind-the-scenes story from her latest kiss scene when AOA appeared on the November 23 broadcast of “Ask Us Anything.”

Seolhyun had a packed schedule filming JTBC’s drama “My Country” and Mnet’s “Queendom” at the same time. Chanmi said, “I was grateful that she practiced the competition song perfectly even though she had a busy schedule and lacked sleep.”

Seo Jang Hoon revealed that he watched all of the episodes of the drama because he’s a big fan of sageuk (Korean historical dramas). When asked what was difficult about shooting “My Country,” Seolhyun replied, “There was a little bit of a kiss scene when filming this drama. It was the scene where Hwi [and my character] confirmed their feelings, so we filmed a lot to capture it from various angles. I felt so shy so there was some heat.”

She continued, “While filming, my face looked so red in the monitor. The director told me to rest and go take a walk.”

Min Kyung Hoon then made everyone laugh by asking, “What episode is that?” 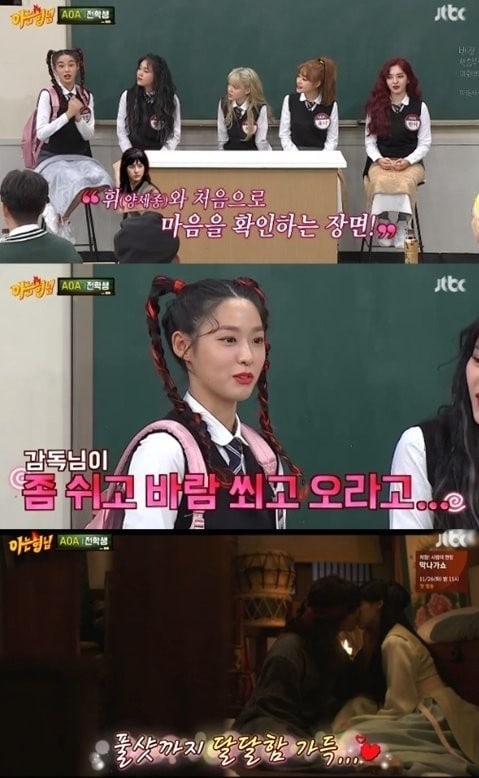 AOA
Ask Us Anything
Seolhyun (AOA)
Yang Se Jong
How does this article make you feel?