On the latest episode of MBC’s “The King of Mask Singer,” the identity of contestant Queen Card was revealed.

During the November 24 broadcast of the singing competition, Queen Card went up against contestant Broccoli in the second round. Queen Card touched audience members’ hearts with her performance of IU’s “Dear Name,” while Broccoli sang Im Jae Bum’s “For You.”

In the end, Queen Card lost the round with 48 points to Broccoli’s 51 points. 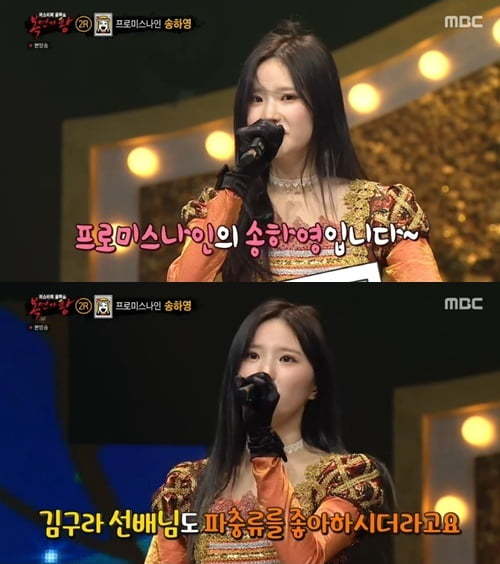 Queen Card was revealed to be fromis_9’s Song Ha Young!

Explaining her decision to perform IU’s “Dear Name,” she said, “I’ve been a fan of IU since before my debut, and she will forever be my role model, which is why I ended up choosing her song.”

She added, “Even before my debut, I wanted to move people with my songs. I will work hard, so please keep an eye on me.”

After the broadcast, fromis_9’s official Twitter account shared an encouraging post for Song Ha Young. The post reads, “I thought I heard an angel’s voice somewhere. Look who it is! It’s Ha Young, the one in charge of healing flover [fromis_9’s official fandom]’s eardrums. ‘Perfect Queen Card’ is indeed a fitting modifier for our Song Ha Young! Thanks to Ha Young, this Sunday night has become 929 times more joyful.”

Watch the latest episode of “The King of Mask Singer” below!

fromis_9
The King of Mask Singer
Song Ha Young
How does this article make you feel?