On this week’s episode of MBC’s “The King of Mask Singer,” the identity of contestant Broccoli was revealed!

During the November 24 broadcast of the singing competition, Broccoli faced off against contestant Cupid for the third round. Cupid sang Kim Gun Mo’s “Beautiful Farewell,” while Broccoli impressed the audience with his cover of Lee Seung Chul’s “Fate.”

Unfortunately, Cupid moved on to the final round with 65 votes to Broccoli’s 34 votes. Broccoli remained on stage to reveal his identity. 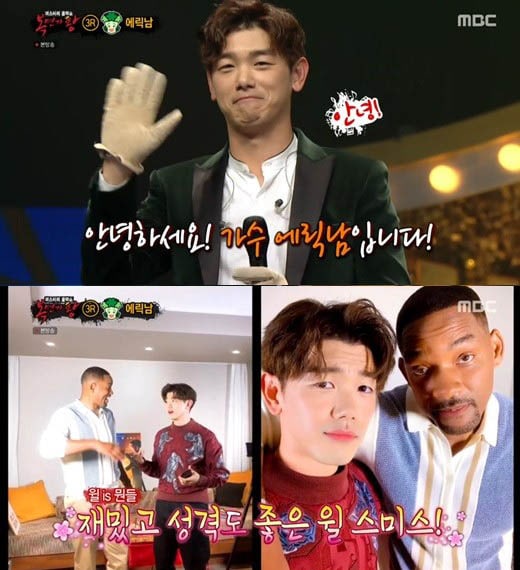 Broccoli turned out to be Eric Nam!

After introducing himself, Eric Nam greeted familiar faces among the panelists, such as Yoon Sang, his old mentor from “Birth of a Great Star 2,” and Fly to the Sky’s Brian.

When asked if he knew any foreign celebrities who would be the perfect fit for “The King of Mask Singer,” Eric Nam chose American actor Will Smith. He explained, “I interviewed [Will Smith] a while ago, but his personality was really great. I saw him singing, rapping, and dancing, and he looked incredibly cool.” He then joked, “I’ll try to contact him through social media.”

Following the broadcast, Eric Nam took to Twitter to write, “Let’s toss some salad. ‘The King of Mask Singer’ was so fun~ Thank you~ Please check out my new album!”

Eric Nam
The King of Mask Singer
How does this article make you feel?