Seo In Guk, Lee Soo Hyuk, And More Share Their Excitement For Upcoming Film As Filming Wraps Up

Filming for the upcoming movie “Pipeline” has finally wrapped up after four months.

“Pipeline,” starring Seo In Guk and Lee Soo Hyuk, is a crime film about a group of thieves and bandits who risk life and limb hoping to turn their lives around by planning an oil heist.

Seo In Guk, who plays the best drilling technician in Korea, said about the film, “‘Pipeline’ is a film that many people spent countless hours toiling over. I’ve especially learned a lot of things from Director Yoo Ha during time we’ve spent working together.” He added, “I’ve really come to love my character, Pindol. He’s a charming guy, and I’ve had so much fun in this role. I really think Pindol is going to stick with me for a long time.”

Lee Soo Hyuk, who plays the wealthy mastermind Gun Woo, said, “This film is the first time I’ve ever worked with Director Yoo Ha, so I was really happy for the opportunity. I can’t believe we’re already wrapping up filming.” He went to add, “ ‘Pipeline’ is a film that shows a lot of actors at their very best. I hope a lot of people go to see the film after it premieres.” 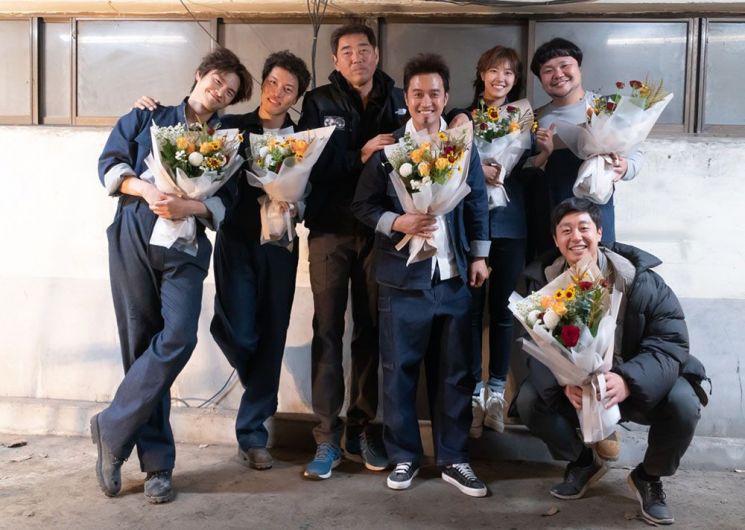 Many of the other cast members also expressed their thanks to their fellow actors and wishes for the film’s success, including Eum Moon Suk, Tae Hang Ho, Yoo Seung Mok, and Bae Da Bin. Yoo Seung Mok especially said, “Because it was the middle of summer, it was difficult filming underground. But the staff and cast all made filming very enjoyable.”

The film’s director, Yoo Ha, was the creative mind behind other notable films such as “Gangnam Blues” and “Once Upon A Time In High School.” The director shared his heartfelt gratitude to all of the actors and staff during the filming, which began during the height of summer at the end of July. Yoo Ha added, “Everyone worked so hard to ensure that the film could become a meaningful and successful piece, and for that I am extremely grateful.”