He continued, “There have been no instances with legal evidence or judgments,” and added, “It is a truth that is openly known by people in the music industry, and they also receive such offers.”

Kim Jak Ga explained, “They receive offers, but the problem with this is that [the process] is highly confidential to the extent of drug dealing. For example, even if someone says they will accept an offer, they cannot even meet people like the brokers and factory managers unless they actually sign the contract.”

“Digital chart manipulation can be clearly seen as a crime, but there is no way to confirm the method in which it takes place without personally engaging in the crime also,” he added.

When asked how the offers are made, Kim Jak Ga responded, “The so-called brokers, also known as viral businesses, directly call the agencies when a singer debuts or releases new music, or they are also connected through referrals.”

He went on, “They introduce themselves as viral businesses and say that if a certain amount of money is paid, they will maintain No. 1 on the chart for a specific number of hours. The offers are made in this kind of way.”

Kim Jak Ga said that the market price is unknown, but it also depends on factors such as if the singer is a rookie or an established artist.

On how the process works, he explained, “From what is already known, offices are set up in places like China with hundreds of cell phones using multiple IDs on music sites. Then streaming takes place instantly, and especially during the night and early morning when there are less users, the tens of thousands of IDs being used can easily raise [a song] to high ranks on charts.”

The following are images of this process featured on a 2015 JTBC report about chart manipulation: 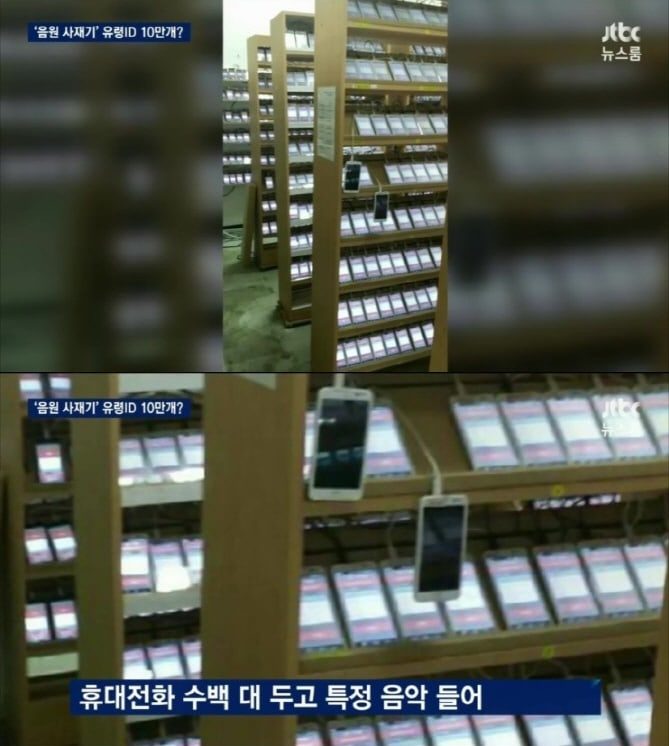 Anchor Kim Hyun Jung asked, “If the rankings are raised at once late at night or early in the morning when the number of users is low, their rankings can be maintained throughout the day by people seeing them at the top of charts and listening out of curiosity, right?” Kim Jak Ga answered, “That is correct.”

Regarding what has changed since two years ago, Kim Jak Ga said that idol fandom power was generally stronger back then. According to Kim Jak Ga, there aren’t as many idols with strong fandom power that can dominate charts these days, so it is much easier for digital chart manipulation to take place.

On why it has been difficult for action to be taken against digital chart manipulation, the music critic reiterated that it is hard to get clear evidence because only those who have engaged in it know the specifics. “The current situation is that it is difficult for detailed evidence to be uncovered unless revealed by a whistleblower. Another reason is that music sites are not actively revealing data and patterns,” he concluded.

Kim Hyun Jung's News Show
How does this article make you feel?