The vlog took viewers behind-the-scenes of Lee Hyori’s pictorial for the December issue of Cosmopolitan magazine.

While getting her makeup done, Lee Hyori talked about photo editing apps. “I don’t like apps because they’re unnatural, but I also don’t like natural [photos],” she said. “I think not taking selfies is a way to have a good day.”

She continued, “But the app that makes your legs look longer is quite nice. I didn’t know about it, but YoonA told me about it while filming ‘Hyori’s Homestay.'” Making everyone laugh, she added, “There was a photo that I took with a horse, and the horse’s legs stretched out too much.” 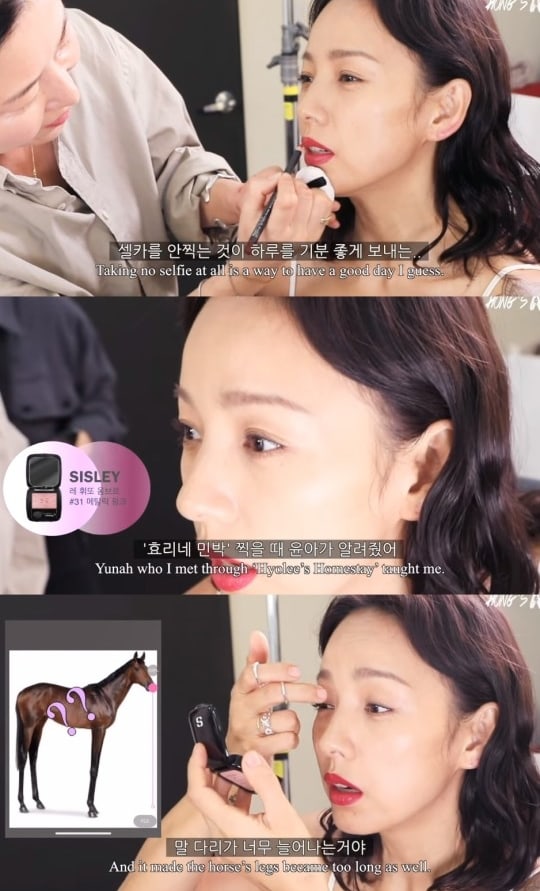 When a staff member asked Lee Hyori if she wore makeup while filming “Camping Club,” the singer answered, “I wore something on my lips. I used it on my lips and my cheeks. I didn’t have time to do face makeup.”

“The other members also couldn’t do it when they woke up in the morning, but put a little bit of cushion makeup,” she said. “All of the members have good skin and clear skin, so it looks natural. I’m a bit darker, so it looks unnatural when I wear it. It’s actually better when I wear a full face of makeup. My face is weird, so it’s actually better to not put on anything.”

After putting on bold lips and wearing a matching red outfit, she jokingly stated, “This is the most amount of styling I’ve done in the last seven years. I don’t think I can go home today. I need to go at least to the club. I can’t go to Jeju Island. I need to live in Seoul.”

Girls' Generation
Lee Hyori
YoonA
How does this article make you feel?