During the December 1 broadcast of the SBS variety show, Jang Yoon Jung appeared as a special guest.

Kim Jong Kook’s mother complimented Jang Yoon Jung by saying, “You’re so pretty now that I’m finally meeting you in person!” She then expressed her concerns about Kim Jong Kook’s single status as she said, “What should I do about my [future] daughter-in-law!”

Jang Yoon Jung responded by saying, “I’m not like Jong Kong where I know exactly what I want in a husband.” She then reminisced about the time she hosted a television show with Kim Jong Kook and revealed, “[Kim Jong Kook] really doesn’t drink. When [the staff and cast members] would have get-togethers, he would drink a few times, but all he did was talk about his mom and dad. He’s such a filial son.” She continued, “He kept talking his conditions for marriage, which was how he would only marry a woman who could be happy with his family.”

When Shin Dong Yup joked, “You probably thought, ‘Ah, this guy isn’t it,’ since women can find that a little burdening,” Jang Yoon Jung insisted, “No, I really liked it!” 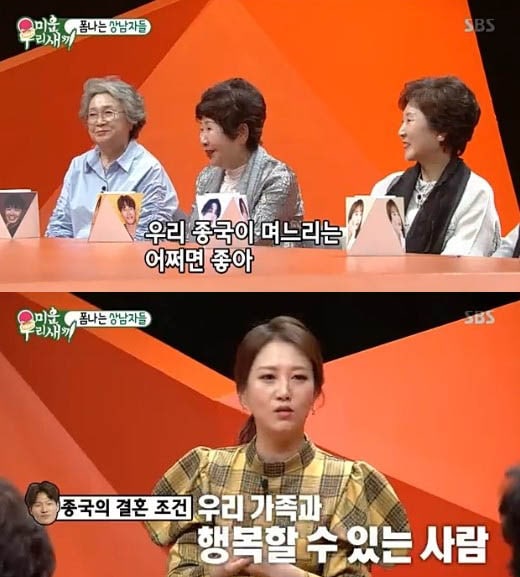 Watch an episode of “My Ugly Duckling” below:

Jang Yoon Jung
Kim Jong Kook
My Ugly Duckling
How does this article make you feel?