With BTS’s Jin celebrating his birthday today, their fans ARMY have taken over the worldwide trends on Twitter to celebrate “Worldwide Handsome” Jin himself!

Jin turns 27 years old (in Western reckoning) on December 4, and ARMY quickly grabbed 16 of the Top 20 global trending topic spots on Twitter with hashtags such as #JINDAY, #HappyJinDay, #TonightAndAlwaysWithJin, #HappyBirthdayJin, and many more. 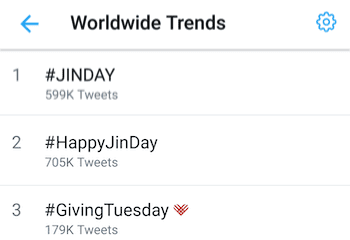 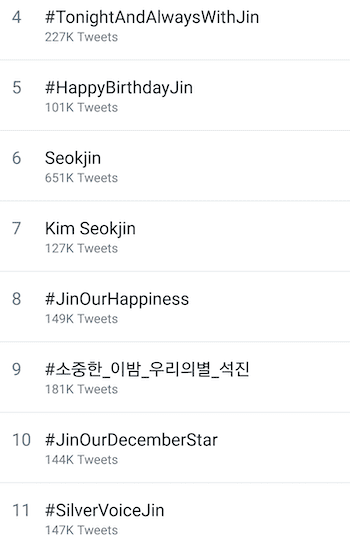 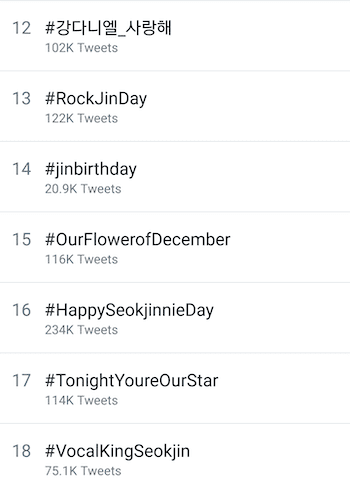 The official BTS account shared a clip of Jin to celebrate his birthday.

The guys held a fun V Live broadcast where many of the members joined Jin to celebrate his birthday while in Japan for the 2019 Mnet Asian Music Awards (MAMA), which are being held on December 4. After the V Live, some of the members began their tradition of sharing funny photos of the birthday boy!

J-Hope first posted two photos of Jin, who’s famous for his broad shoulders, with the caption, “Angular Jin, Powerful Jin” and wished him a happy birthday in the hashtags. He used word play to include Jin’s name!

He then posted a video of Jin and wrote, “Handsome while on his phone,” again using the Jin word play.

RM was up next and he wrote in the hashtags that Jin’s birthday always falls on MAMA and jokingly called Jin “Seokjin mama,” a play on words as “mama” (마마) in Korean means “Your royal highness.” He used an antiquated way of writing (which could be used in historical dramas about royalty) to say, “I express my congratulations.”

Suga (who hadn’t been able to join the group during the V Live) then posted to also wish Jin a happy birthday in formal language. He added, “Let’s go fishing” before wondering, “Why is your birthday always on the day of MAMA?” He wrote, “A question” and then said, “Sleeping for MAMA.”

Check out tweets from fans below!

a cute compilation of seokjin showing armys the hearts he made for them to remind y'all that he never hesitates to show how much he loves and appreciates us. I hope he knows that our love for him is bigger than all the ? he's made for us together #JINDAYpic.twitter.com/4gSVbGSY8i