Through a report by Dispatch, Gaon Chart has clarified the data that led to Kang Daniel’s win on “The Show” on December 3.

Dispatch states that some fans had cited rankings from Melon’s realtime chart to question Kang Daniel’s win. They asked how he had come in first for his song “Touchin'” when it had already fallen off the chart, while AOA’s “Come See Me” was maintaining rankings between No. 50 to 70.

In response to this, Dispatch wrote that their investigation into the matter showed no issues with the score calculation for “The Show.” According to data collected by Gaon Chart, Kang Daniel’s score was four times higher than AOA’s.

A source from the “The Show” confirmed that they use digital scores from Gaon. “‘The Show’ can’t touch that data,” they added. “It seems that there’s been a misunderstanding after some fans made a comparison with Melon’s chart.”

A source from Gaon stated, “We do not aggregate chart rankings from specific music companies such as Melon.”

“We receive total data on downloads and streams from 12 music platform companies,” they explained. “The Gaon index is calculated from that data. Streams and downloads are assigned different weights.”

As some fans pointed out that Kang Daniel had no physical release for this single and therefore wouldn’t have points from that, Dispatch asked the sources from “The Show” and Gaon about this. They confirmed that his physical score was zero, however they clarified that his digital score was much higher, which was reflected in his ranking on “The Show.”

SBS MTV’s “The Show” has responded to questions that were raised regarding Kang Daniel’s win on this week’s episode. 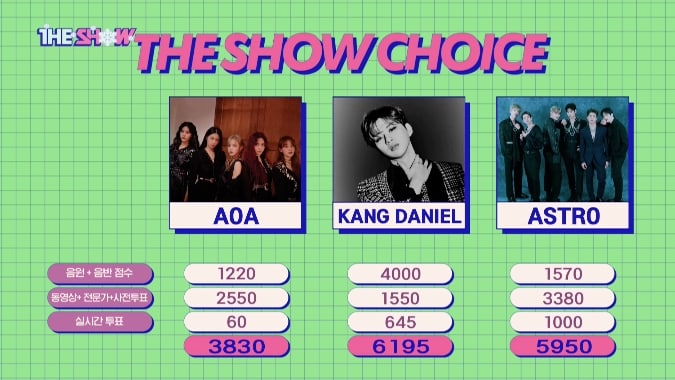 A source from “The Show” stated to Sports Chosun, “We have seen the controversy. The scores on ‘The Show’ consist of 10 percent physical album sales and 40 percent digital sales. Because Kang Daniel’s new song ‘Touchin” is a digital single, it is correct that the physical album sales score is zero. However, according to our own calculation of digital sales, Kang Daniel received a much higher score than AOA or ASTRO and was given 4000 points. Thus, it is correct that Kang Daniel is No. 1. There are no issues with the results.”

The Show
Kang Daniel
How does this article make you feel?