EXO’s Suho talked about the unofficial “title” he shares with BTS’s Jin and SHINee’s Minho on “Ask Us Anything”!

On the December 7 episode of the JTBC variety show, EXO appeared as guests to promote their latest comeback with their sixth studio album “OBSESSION.”

During the guessing-game segment of the episode, Suho told the “Ask Us Anything” cast, “When you’re an idol, people come up with many keywords and phrases to describe you. Heechul‘s is ‘Universe Star,’ and there are lots of other titles like that. I also have many such ‘titles,’ but which one is my favorite?”

The cast and his fellow EXO members guessed many incorrect answers, including “guardian angel,” “church oppa,” and “sculpture.” Suho then gave them a hint, saying, “It has something to do with my appearance. It came about because I appear trustworthy and likable.”

Suho explained, “I got chosen for the title along with BTS’s Jin and SHINee’s Minho. ‘Type to get a meet-the-parents free pass’ means that [when you meet your bride-to-be’s parents], they take one look at your face and immediately respond, ‘My son-in-law!’ So it made me feel proud, and I really liked it.” 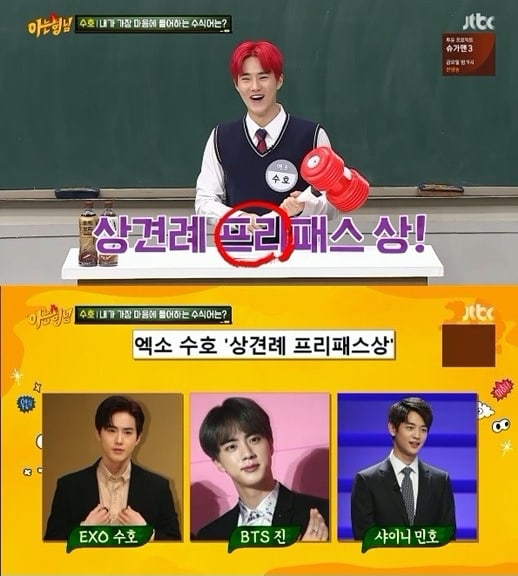