On this week’s episode of MBC’s “The King of Mask Singer,” the identity of contestant Dice was revealed!

Although both contestants melted the audience’s hearts, it was Roasted Chestnut who moved onto the next round with 61 votes to Dice’s 38 votes. Dice remained on stage to reveal her identity. 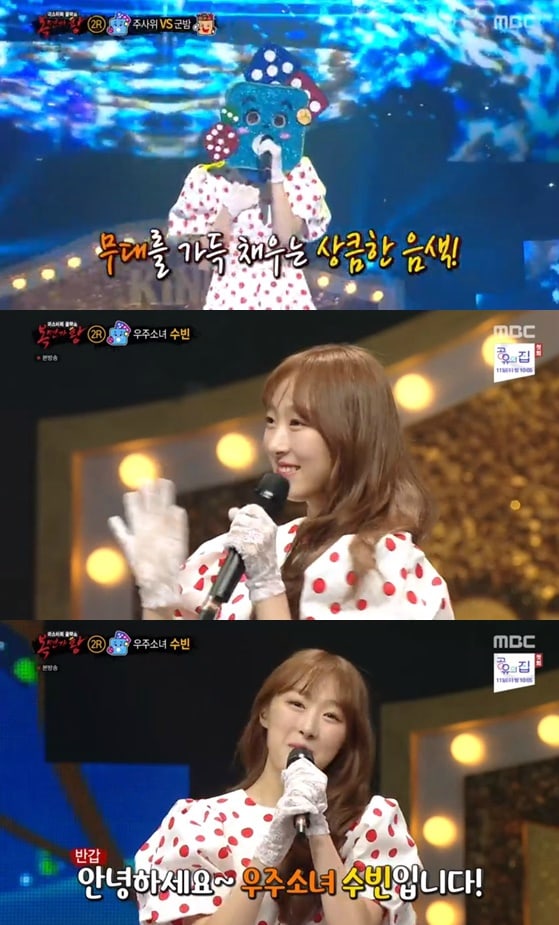 Dice turned out to be WJSN’s Soobin!

Soobin said, “In general, WJSN sings well. The competition was fierce to get here.”

Then she confessed, “I once gave up being a singer. I trained for a long time. I made my debut after 8 years as a trainee, but it was so hard to make my debut. While preparing for eight years, I never thought of quitting. I thought my life would be better once I debuted, but that was just the beginning. I thought that this wasn’t my road. But as I stood on stage the next day, I thought, ‘If this was my last stage, I would regret it.’ So I stopped thinking about giving up.”

Lastly, she commented, “I was afraid because I had never sung alone on stage, but I strengthened my will with the performance today. I’ll show you a better side of me in the future.”

Following the broadcast, Soobin took to social media to write, “Dice was me! It was my first time singing alone, so I was really nervous, but it was a great experience. Next time, I’ll go further. Thank you, Ujung [fandom name]. Thank you also, ‘The King of Mask Singer.'”

WJSN
Soobin (WJSN)
The King of Mask Singer
How does this article make you feel?