The December 10 episode of their show focused on the story of another woman, who says she was physically assaulted by Kim Gun Mo on January 10, 2007. At the time, she was the manager of an adult entertainment establishment. The hosts explained that she’d come forward with the information as she wanted to help because she was angered by the one-sided criticisms being made against the woman who accused Kim Gun Mo of sexual assault.

The woman interviewed in the December 10 episode said, “Kim Gun Mo’s partner was a year older than me, and she said to me, ‘Why are you speaking informally to me?’ and we got into an argument. We went into an empty room and were arguing, but Kim Gun Mo opened the door and came in swearing at me and saying, ‘You’re too loud. Didn’t I say that you’re too loud?’ He grabbed my hair, knocked me down, and punched me.” She said that he punched her many times in the nose and eye and also hit her in the stomach.

“I tried to avoid getting hit, but because he was strong, I couldn’t fight back,” she said. “When I was getting hit, I thought he didn’t seem like he was someone in their right mind, since people don’t hit others like that just because they’re being loud.” She shared that she could feel her eye swelling up, and her nose bled during the attack. When someone opened the door, she ran out, got her things, and took a taxi to the hospital.

A medical document from the day shows that she was experiencing eyeball pain and a headache, and it states that this occurred at a drinking establishment after being hit by a man. It shows that she had an orbital fracture as well as a nasal bone fracture. 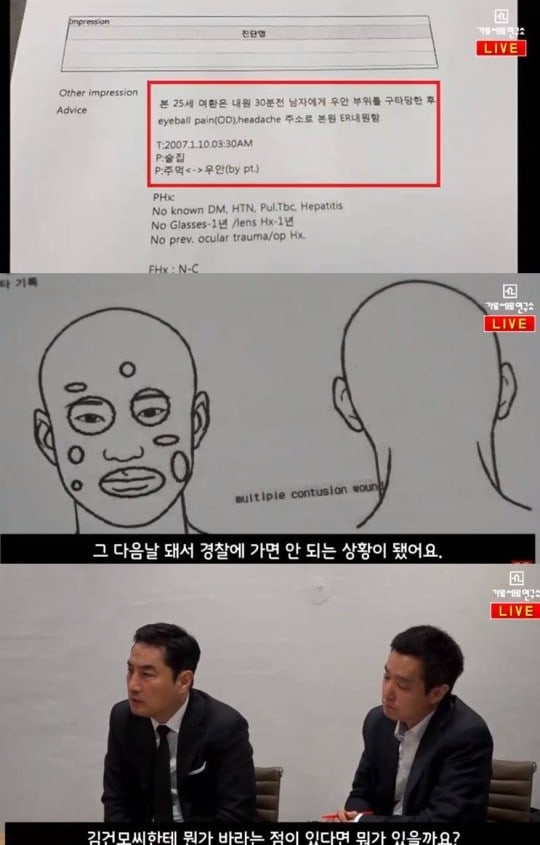 The woman shared that she wasn’t able to report the assault to the police the next day because of intimidation from Kim Gun Mo and the business owner, who said she shouldn’t reveal what happened. She went on to say that because of rumors about her, she then couldn’t work at other establishments, so she’s been working in bakeries and manhwa (comic book) cafes.

The show also revealed that this incident had been investigated by MBC at the time but it wasn’t reported on. Host Kim Yong Suk said while they made a request to purchase the network’s footage about it, they weren’t able to. The woman shared that reporters from MBC had come to interview her when she was in the hospital, but she had been told by the business owner and Kim Gun Mo’s representatives not to speak to anyone.

“I hope that Kim Gun Mo won’t appear on television,” she said. She described him as someone who’s hiding his true self on TV and tricking the public while really being someone who becomes like a monster when he drinks. She clarified, “I’m not looking for money, I just want to stand beside the woman who was a victim. I don’t know who she is, but I want to give her strength.”

In response to the initial allegations of sexual assault, Kim Gun Mo’s agency has stated they are groundless and they plan to take legal action.

Kim Gun Mo
How does this article make you feel?