Baek Yerin took over the charts once again!

On December 10 at 6 p.m. KST, Baek Yerin released her new album “Every letter I sent you,” which contains 18 tracks in all. “Square (2017)” is one of its three title tracks, and Baek Yerin both wrote the lyrics for the English-language song as well as co-composed it. 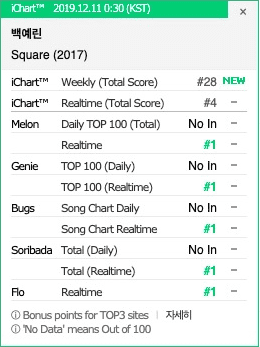 This is Baek Yerin’s first release under her new independent label Blue Vinyl, which she launched after leaving JYP Entertainment in September.

Baek Yerin
How does this article make you feel?