EXO and IU dominated the latest Gaon charts, with EXO’s sixth studio album “OBSESSION” topping the physical album chart for November while also maintaining its reign over the weekly album chart for the second consecutive week.

Meanwhile, IU achieved a triple crown for November after sweeping all three of Gaon’s digital charts with her pre-release track “Love Poem.” The song took No. 1 on the overall digital chart, the digital download chart, and the streaming chart for the month.

IU also earned a double crown on the weekly charts with her title track “Blueming,” which held onto its spot at No. 1 on both the overall digital chart and the streaming chart for the third week in a row.

Check out the top five for each of the charts below: 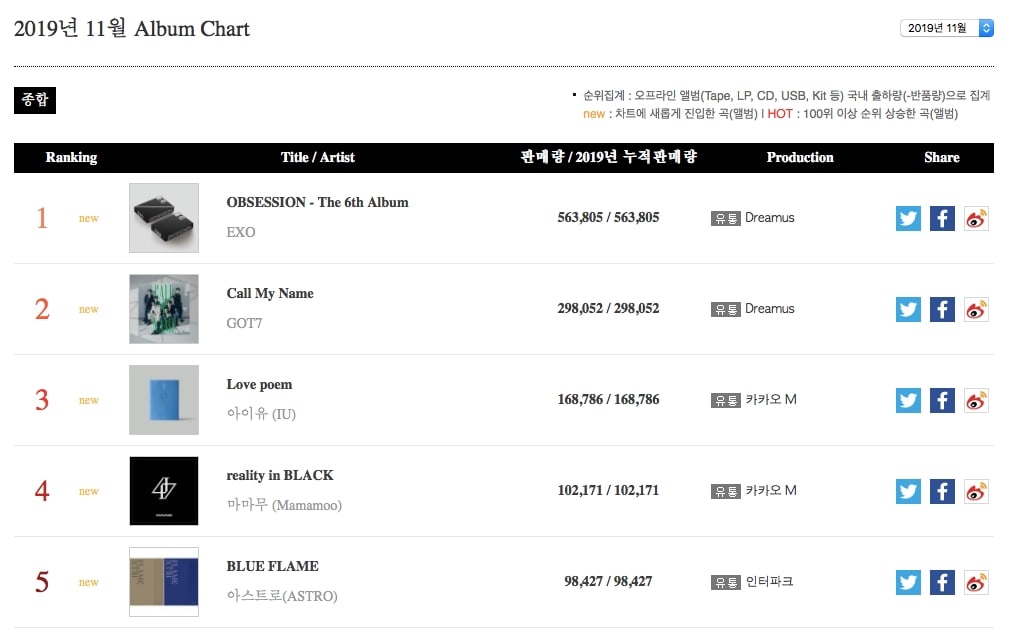 After debuting at No. 1 last week, EXO’s “OBSESSION” also remained at the top of the physical album chart for the week of December 1 to 7. Park Ji Hoon’s “360” debuted at No. 2, while ASTRO’s “BLUE FLAME” and CIX’s “HELLO Chapter 2. Hello, Strange Place” shot back up the charts to No. 3 and No. 4 respectively. Finally, IU’s “Love Poem” stayed strong at No. 5 for the week. 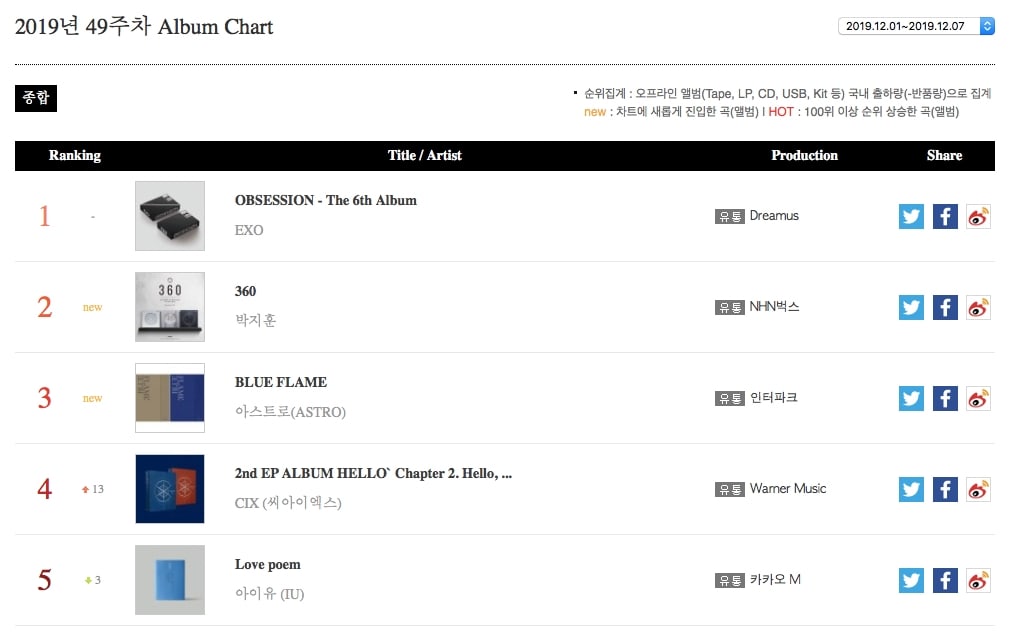 The top five songs on the overall digital chart and the streaming chart were exactly the same for the month of November: IU’s “Love Poem” came in at No. 1, Noel’s “Late Night” at No. 2, AKMU’s “How Can I Love the Heartbreak, You’re the One I Love” at No. 3, MC Mong’s “Fame” at No. 4, and Jang Beom June’s “Your Shampoo Scent in the Flowers” (from the OST of JTBC’s “Melo is My Nature“) at No. 5. 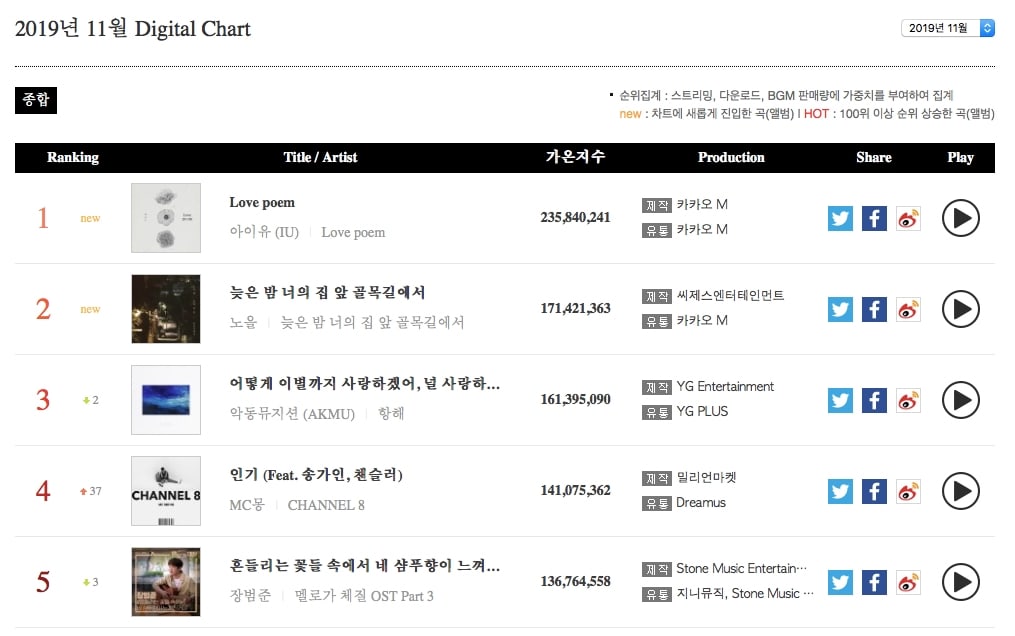 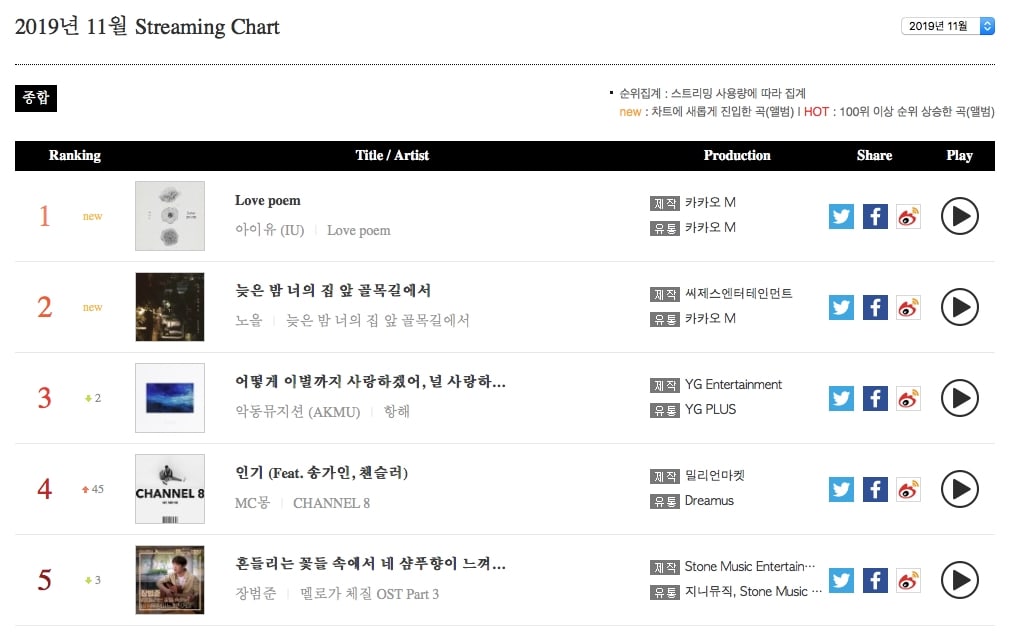 IU’s “Blueming” maintained its position at the top of the overall digital chart for the third consecutive week, with Idina Menzel and AURORA’s “Into the Unknown” (from the soundtrack of “Frozen 2”) rising to No. 2. Noel’s “Late Night” charted at No. 3 for the week, followed by Kim Na Young and Yang Da Il’s duet “Goodbye List” at No. 4. Finally, Davichi’s new single “Dear” debuted at No. 5 on this week’s chart. 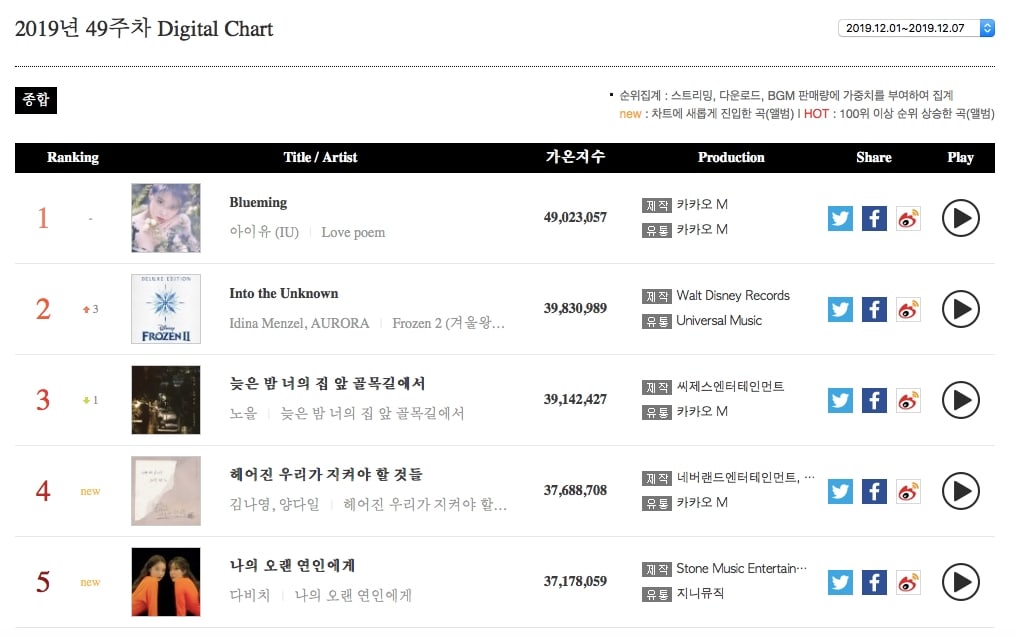 IU’s “Blueming” and Noel’s “Late Night” both held onto their respective spots at No. 1 and No. 2 on the streaming chart this week, followed by Idina Menzel and AURORA’s “Into the Unknown” at No. 3. IU claimed another spot in the top five with her song “Love Poem,” which came in at No. 4 for the week, while Kim Na Young and Yang Da Il’s “Goodbye List” charted at No. 5. 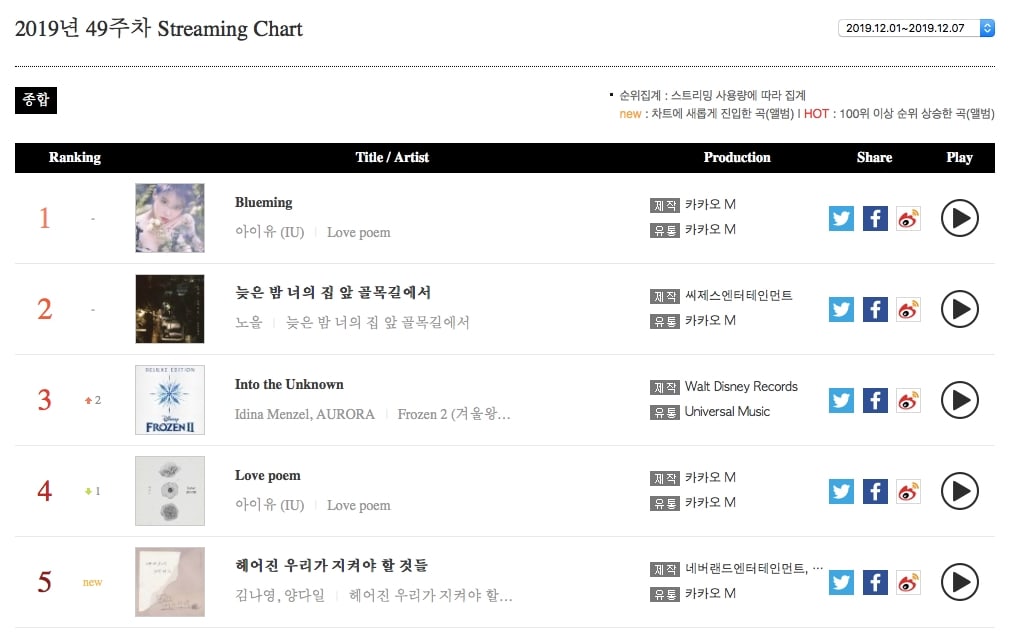 IU dominated the digital download chart for November, sweeping the top two spots with “Love Poem” and “Blueming” respectively. Noel’s “Late Night” took No. 3 for the month, followed by MAMAMOO’s “HIP” at No. 4 and Girls’ Generation’s Taeyeon‘s “Spark” at No. 5. 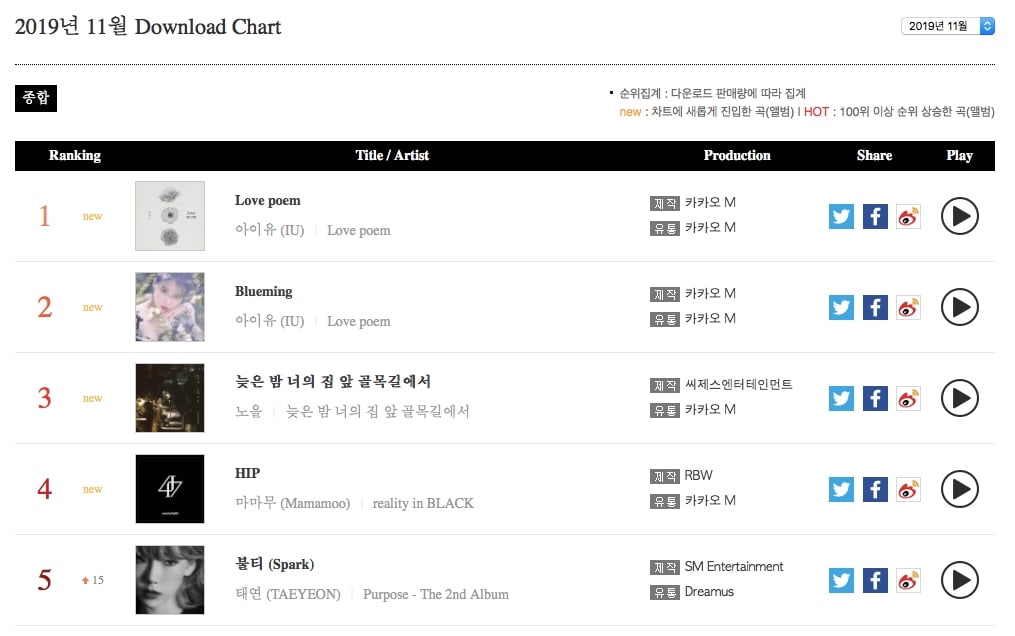 Davichi’s “Dear” debuted at No. 1 on this week’s download chart, while EXO’s latest title track “Obsession” stayed strong at No. 2. Kim Na Young and Yang Da Il’s “Goodbye List” came in at No. 3, Idina Menzel and AURORA’s “Into the Unknown” at No. 4, and IU’s Blueming” at No. 5. 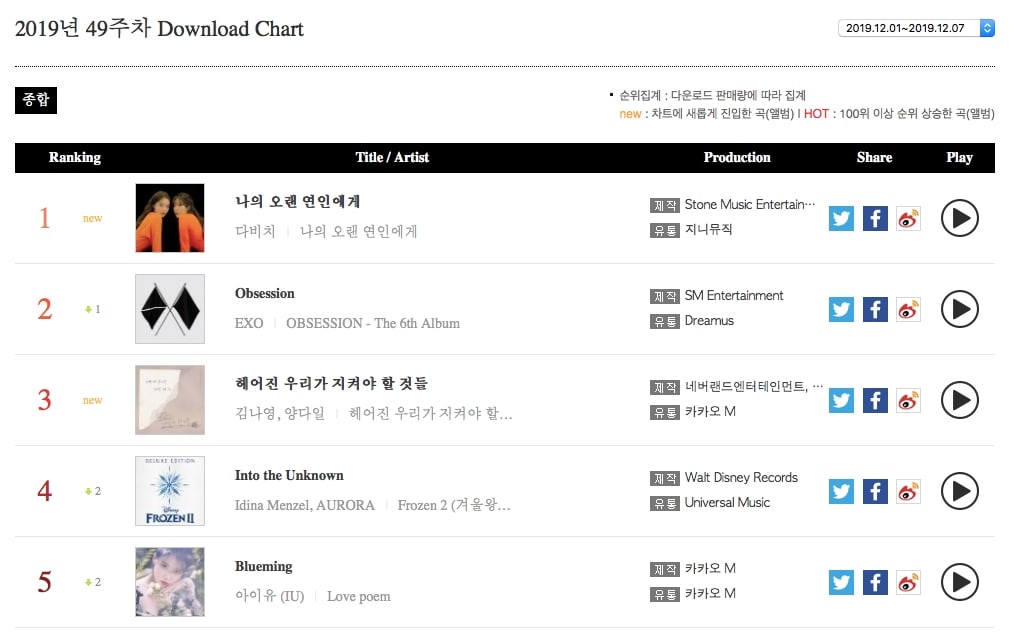 BTS spent their fifth month at the top of Gaon’s monthly “Social Chart 2.0,” with WINNER and GOT7 rising to No. 2 and No. 3 respectively. UP10TION’s Lee Jin Hyuk charted at No. 4 for the month, followed by MAMAMOO at No. 5. 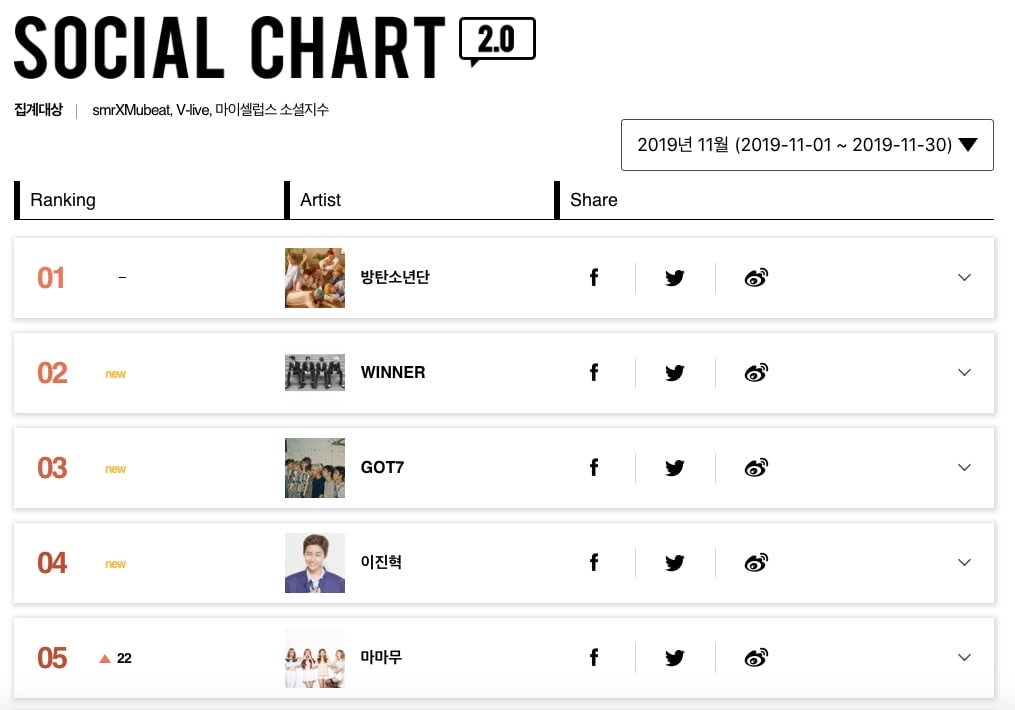 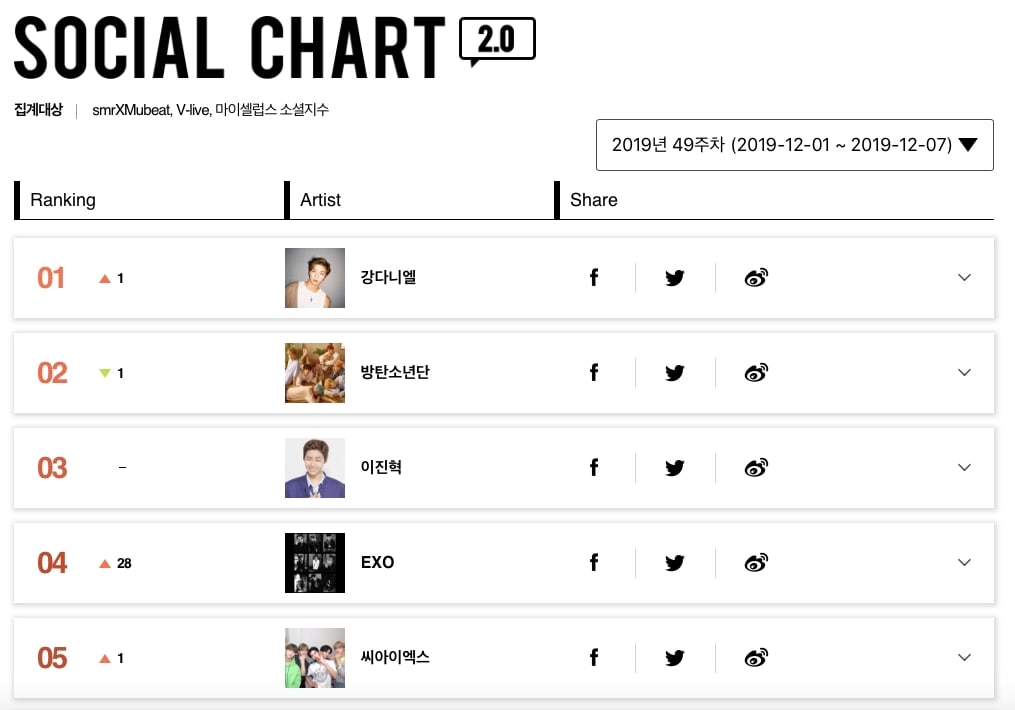