LOONA Becomes 1st K-Pop Girl Group To Reach No. 1 On Both US iTunes’s Top Songs And Albums Charts

LOONA and their fans Orbits have achieved an amazing feat!

On December 13, the group released the lead single “365” for their upcoming album. Despite no official promotions planned for the song nor a music video, the track reached No. 1 on iTunes’s Top Songs chart in the United States within hours! 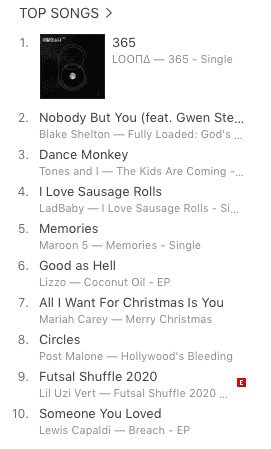 The only other K-pop girl group to top the chart is BLACKPINK, who did so with “Kill This Love.”

In October, LOONA’s fans sent their album “X X” to the top of the iTunes Top Albums chart in the United States. Previous K-pop girl groups who’ve done so in the past are Red Velvet and TWICE.

LOONA’s “365” has also taken No. 1 on the Top Songs chart on iTunes in many other regions around the world. Stay tuned for updates on the total number!