In recent episodes, Na Jung Sun (Jang Nara) joined Sungwoon Department Store’s CEO Ha Tae Young’s (Park Ji Young‘s) side in order to fight against the “private scandal,” while Park Sung Joon (Lee Sang Yoon) stayed loyal to the vice-president (Park Sung Keun). Meanwhile, On Yoo Ri (Pyo Ye Jin) was promoted to a higher position in the marketing team after it was revealed that she was the daughter of the vice-president born out of wedlock. Having found out about the complicated relationship between the three, Ma Sang Woo (Shin Jae Ha) tried to provide support for Na Jung Sun.

Furthermore, Na Jung Sun suggested the establishment of a black society level to Ha Tae Young in order to counter Park Sung Joon, and the latest episode ended with an explosive confrontation involving the VIP clients management team and the marketing team meeting as a TF (task force) team.

In the new stills, Na Jung Sun is receiving an IV drip while Ma Sang Woo is looking after her. Meanwhile, Park Sung Joon and On Yoo Ri are having a birthday party just between the two of them. While Na Jung Sun appears to be deeply concerned after checking on the tired-looking Ma Sang Woo, Park Sung Joon and On Yoo Ri are enjoying their time together as they light a candle on the cake. Viewers are curious to discover how the relationship between the four characters will unfold. 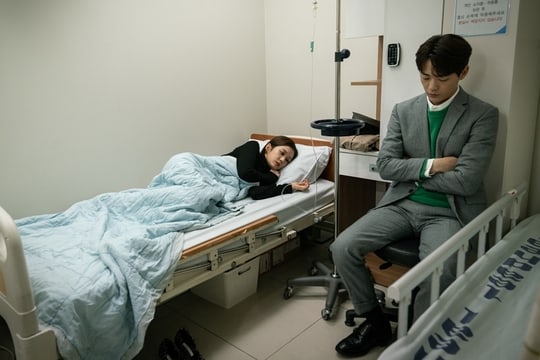 During the filming, Shin Jae Ha and the staff all filmed amidst a serious vibe in order for Jang Nara to focus on her character’s emotions. Like his character Ma Sang Woo, Shin Jae Ha continued to show support for Jang Nara during the filming, creating a warm vibe on set. On the other hand, Lee Sang Yoon and Pyo Ye Jin rehearsed with a lively mood as their characters managed to enjoy a brief moment of peace. 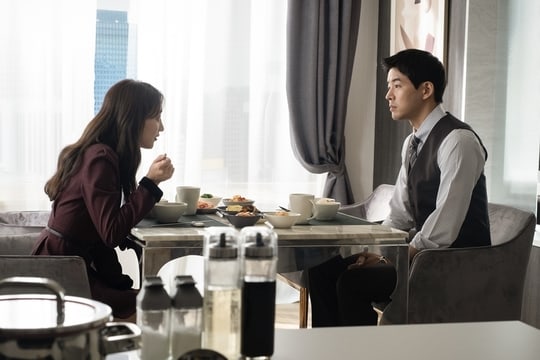 The production staff shared, “In today’s broadcast, with the creation of the TF team, a new development in the situation will occur. In addition to the [shock delivered by the relationships between] Jang Nara, Lee Sang Yoon, Pyo Ye Jin, and Shin Jae Ha, ‘VIP’ will continue to deliver shocks and twists, so please continue to show interest.”

Catch up with the latest episode of “VIP” on Viki below!