Lee Joon has officially resumed his activities in the industry following the end of his military service!

After being discharged from the military on December 19, Lee Joon took over the airwaves the next day as the new DJ of the radio show “Young Street.” He takes the baton from his girlfriend, actress Jung So Min, who hosted the show for the past year and ended her run on December 15.

Lee Joon said at the beginning of the show, “I’m sitting in front of the mic. I hope that I will be a sincere person in front of the mic.” He admitted that he didn’t feel familiar yet with conveying his thoughts and sharing his feelings on air, but he promised that he’ll be able to get closer with everyone every day.

He also shyly addressed the camera and said, “I also listened to ‘Young Street’ a lot. I’m nervous to be doing this but to be honest, since I came to the studio a lot when I was a singer, it doesn’t feel strange to me. I think this will be fun.”

A listener commented that his hands seemed to be shaking as he held the paper, and he replied, “I tend to get nervous easily. It’s been 10 years since I debuted but I think I haven’t totally adjusted to this world. When I’m acting, I get nervous in emotional scenes too. Although it doesn’t show on screen, I get a cold sweat on my back.” He said that he wasn’t simply nervous because it was the first day, clarifying that he’d be nervous if it was recorded and not live as well.

Lee Joon was asked how the people around him reacted to the news that he was going to be a radio DJ. “There aren’t many people around me,” he replied. “My reaction was ‘I can do a good job.’ The thing that I was most confident about was being a DJ. Although I might be nervous since it’s the first broadcast, when I was a special DJ I felt warm and like I was being healed.” 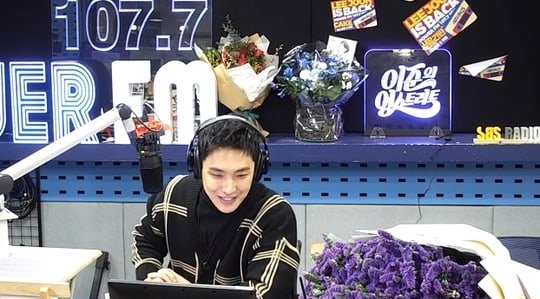 Many overseas fans wrote in to congratulate Lee Joon on his first day as a DJ. When a fan from Mexico left a comment, Lee Joon replied, “When I went to Mexico, I wasn’t able to do my fan meeting properly because of a large earthquake. It was very dangerous. I hope we see each other again in the future.”

He also said, “I’ve returned after two years and two or three months, and it’s touching that people have continued to like me. I feel even more grateful than I did in the past.”

Lee Joon
Lee Joon's Young Street
How does this article make you feel?