The cast of “VIP” chose their favorite scenes from the drama!

Jang Nara also picked the scene in episode ten as an important one. In the episode, Na Jung Sun found out that Park Sung Joon’s other woman was Ha Yoo Ri and asked Ha Yoo Ri if she had a boyfriend.

The actress commented, “When I was shooting the two scenes, it felt like I was beating around the bush because I was afraid even though I knew what the answer was. It was interesting to realize through the other person that it’s the truth. It was fun to think about how I should act that I’m trying to appear fine despite not being fine, and the tension between actors [was interesting as well].”

In the ninth episode, Park Sung Joon shared his honest feelings to Na Jung Sun. She was waiting for him at the cafe to discuss the “private scandal” when Park Sung Joon received a message from Ha Yoo Ri. After much agonizing, he finally headed to Ha Yoo Ri. Later on, Na Jung Sun demanded to know about his other woman, but Park Sung Joon shocked viewers by saying, “Let’s stop,” and asking to bring an end to their marriage.

Lee Sang Yoon explained, “When Park Sung Joon said, ‘Let’s stop,’ in the middle of their conversation, I personally thought this scene embodied their psychological state. The differences between their positions were clearly revealed, and Park Sung Joon, who had not expressed his feelings well before, showed how he felt in this scene. Above all, I remember that I had good teamwork with Jang Nara in this scene, so I want to choose it as a great scene.”

Lee Chung Ah shared, “A small mistake that started with Park Sung Joon’s nut allergy made Na Jung Sun’s feelings explode, and the scene completely brought their relationship to the surface. This scene was definitely overwhelming. I think it was provided perfect catharsis with the addition of the five actors’ excellent acting and production.” 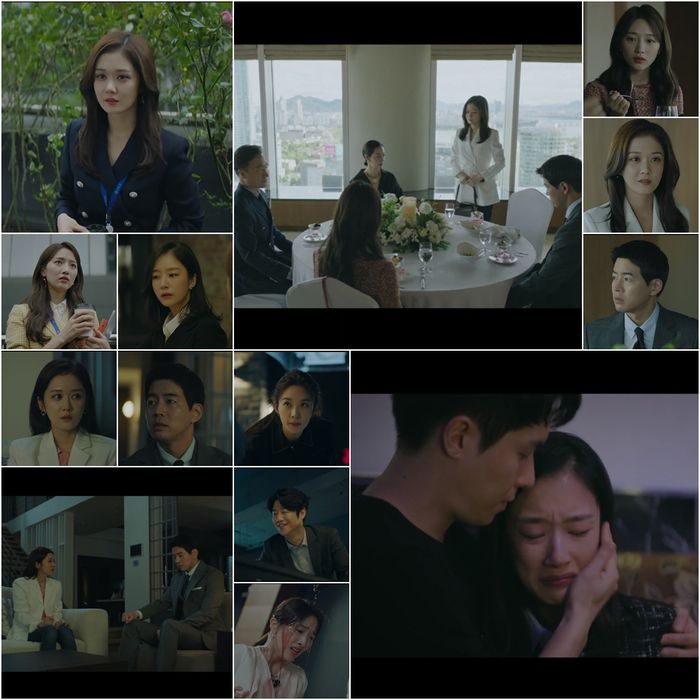 Kwak Sun Young: When the “company couple” was born

During episode 14, Lee Hyun Ah (Lee Chung Ah) and Cha Jin Ho (Jung Joon Won) spent some time together after work. Cha Jin Ho suggested to Lee Hyun Ah, who was feeling down, to play a game with him, and that led her to open up her candid feelings about Na Jung Sun’s promotion. After that, Lee Hyun Ah asked Cha Jin Ho to go out with her, and Cha Jin Ho responded by taking her hand.

Kwak Sun Young said, “I felt a sense of refreshment. I was watching it while drinking warm pu’er tea, and I felt a fizz. I took beer out of the refrigerator and drank it along with those in the screen.”

In episode eight, Ha Yoo Ri guided an old gentleman, who was lost behind the stage, to the event. In the process, she came across some VIP customers and served them wine. Lee Myung Eun (Jeon Hye Jin) was angry at Ha Yoo Ri for disgracing the vice president and herself. When Ha Yoo Ri poured her wine that had gone bad, Lee Myung Eun poured wine over Ha Yoo Ri’s head while saying, “Even if it’s new, if it goes bad, it’s trash. Don’t you think so?”

The actress commented, “”I remember this scene because it was when Ha Yoo Ri, who had been striving to endure everything, finally collapsed. It was a scene I was afraid of, but thanks to the help of many people, I was able to film it safely.”

Shin Jae Ha: When Song Mi Na vented about her life as a working mom

Shin Jae Ha admitted, “It was heartbreaking to see Song Mi Na, who decided to quit her job, confess her complicated feelings to Lee Byung Hoon. Even though I’m not married and don’t have any kids, I became so absorbed in the scene and felt her pain with her. Kwak Sun Young, who played Song Mi Na, expressed the situation and emotions so well that not only was I able to understand and empathize with the scene, but the other viewers were able to do so as well.”

The production crew said, “The explosive performance of the high-end actors has created a drama we’re proud, in which all scenes are great scenes. Please watch ‘VIP,’ which will deliver unpredictable twists and shocking developments until the end, with a lot of interest.”

What was your favorite moment from “VIP” so far?

Watch the latest episode of “VIP” on Viki!