On the latest episode of MBC’s “The King of Mask Singer,” the identity of contestant Sports Car was revealed.

During the December 22 broadcast of the singing competition, Sports Car went up against contestant Cats Man in the second round. Sports Car impressed the audience with his performance of Jung Il Young’s “Prayer,” while Cats Man sang Lee Chi Hyun & Friends’ “Only You Can.” 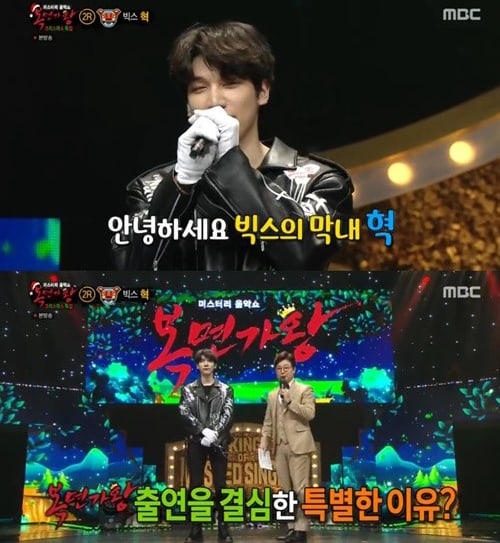 In the end, Cats Man took the win with 69 votes to Sports Car’s 30 votes. Following his defeat, Sports Car took off his mask and revealed himself to be VIXX’s Hyuk!

After greeting the audience and panelists, Hyuk talked about his reason for appearing on the show. He explained, “As our members began enlisting in the military, we’ve had this military hiatus period. I want to repay the fans for [the members’] empty spots since they led [me] during the early days of our debut.”

He continued, “Just at that moment, I received a casting offer for the show, so I thought that this performance would be great for a brand new start.”

Talking about his song choice, Hyuk commented, “‘Autumn in My Heart’ was the first drama of my life. It’s such a special drama to me.”

He then mentioned his friendship with Song Seung Heon as he said, “My former co-star Song Seung Heon also appeared in that drama. We actually sang ‘Prayer’ together during the finale party [for our drama]. It started off as almost a joke, but it turned quite serious. It was extraordinary. I could feel the nostalgia. After experiencing those feelings, I’ve been really into [the song], so I ended up choosing it [for my performance].”

When asked about Song Seung Heon’s singing abilities, Hyuk responded, “He sings as well as he is handsome. He could even compete to be the King.”

Following the broadcast, the group’s official Twitter account shared several photos of Hyuk and wrote, “This is the image of Sports Car Hyuk, who showed off his presence even through the previews on ‘The King of Mask Singer.’ I’m positive this is our big, cute kid. Success at charging into the Starlight agents’ hearts.”

VIXX
Hyuk
The King of Mask Singer
How does this article make you feel?