Red Velvet’s Fans Have Fallen In Love With Their New “Psycho” MV: Check Out The Best Reaction Tweets

On December 23, the group released their repackaged album “The ReVe Festival: Finale” and its title track “Psycho.” Soon after, many hashtags trended worldwide on Twitter as Red Velvet’s fans ReVeluv celebrated their comeback, including #SayPSYCHO, #PsychoWithRV, and #RedVelvet, and many of the members’ names were also trending. 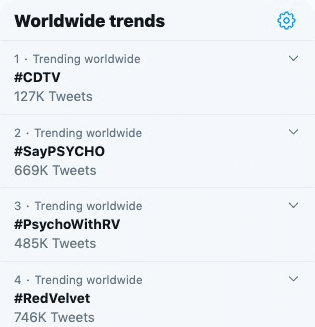 Fans have shared some of their favorite moments from the song, choreo, and music video!

this scene alone is the reason why psycho is one of the best mvs rv has pic.twitter.com/yEamjBDQEa

This intro is for Seulgi and Wendy to flex their vocals, and for Joy to make us shut up and listen with her sexy and breathy voice saying "Psycho."#SayPSYCHO #PsychoWithRV pic.twitter.com/f6xiR8QnV5

i love irene’s voice here so much the way i got hooked as soon as the song starts ? #SayPSYCHO #PsychoWithRV @RVsmtown #RedVelvet pic.twitter.com/6A6gFNOWm1

what the last 20 sec of psycho feel like: pic.twitter.com/PNn9otetXk

Everyone’s blown away by how amazing the members look in each and every scene.

And their stylists are also getting a round of applause.

red velvet’s outfits in psycho look so beautiful and fit every member.

Once again, Red Velvet has proven they can take on any concept.

In one year @RVsmtown gave us experimental and chaotic Zimzalabim, cute and fresh Umpah Umpah and sexy and mysterious Psycho.

Overall, the MV has lots to love!

they did so great. red velvet just proves that their releases are excellent. the 'p' in 'psycho' means POWERFUL. psycho is powerful#SayPSYCHO #PsychoWithRV pic.twitter.com/l73Ewq3dCm

What do you think of “Psycho”?