Kim Kang Hoon spoke all about his latest drama “When the Camellia Blooms”!

On the December 26 episode of YTN’s “News Night,” child actor Kim Kang Hoon appeared as a guest for an interview.

He began, “Many people recognize me as Pil Goo, or Dong Baek’s son, after I appeared in ‘When the Camellia Blooms.’ Although the drama ended two weeks ago, [my popularity] seems about the same.”

When asked who he had the best chemistry with, Kim Kang Hoon replied, “I had the best chemistry with my [onscreen] mom Gong Hyo Jin. We met up a lot and saw each other almost every day, so I liked how I could focus even when I was acting. I think we were more in-sync because Gong Hyo Jin said, ‘Let’s do it like this for this scene’ or ‘Do you want to improvise like this?'” 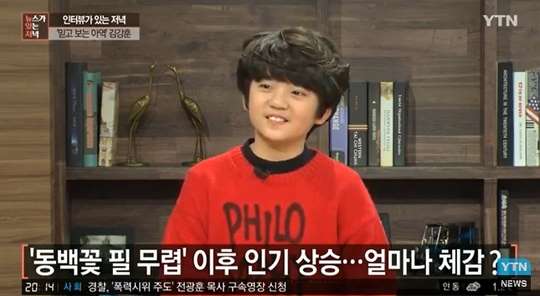 Speaking about working with Go Doo Shim, he said, “I saw her a lot while working on the film ‘E.X.I.T’ so we were close, and I was really happy to see her again. Grandma Go Doo Shim said, ‘Let’s eat with our hands. It’ll look more delicious.’ I spent every day with the actors and staff members for six months like a family, so I was sad when we couldn’t see each other anymore.”

Kim Kang Hoon also compared himself with his character. “Pil Goo is mature,” he explained. “He’s mature, but I don’t think he can protect his mother. I don’t have a personality where I yell at other people like Pil Goo does. I’m introverted when I’m outside, but active at home.”

Revealing the secret behind his crying scenes, the child actor said, “I portrayed many sad characters since I was young, so I feel confident about crying scenes. In the past, I imagined that my mom was dying. These days, I cried because the context in the script was sad.” He continued, “I can memorize the lines after reading it many times. I memorize all of it because they said I can go out and play if I memorize it all. I can’t really watch my acting. It’s okay to watch it by myself, but it’s embarrassing watching it with my mom, dad, and younger sibling.” 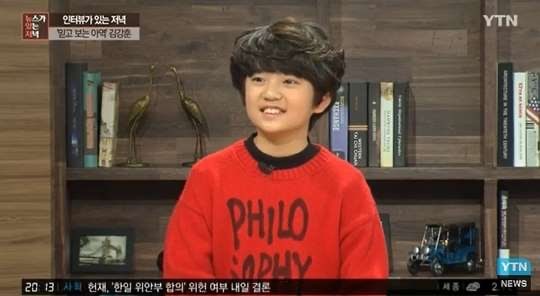 Kim Kang Hoon concluded, “I want to become a kind, talented, and handsome actor like Kang Ha Neul.” As for any expectations at the 2019 KBS Drama Awards, he answered, “I don’t have expectations. It’ll be nice if I receive [any awards].”