The cast of “New Journey to the West” made shocking transformations once again!

On the December 27 broadcast, the members boarded a train to the city of Milyang and were told that the episode was a cinema special. Kang Ho Dong commented, “The costumes today must be no joke.”

The cast solved a cinema speed quiz in pairs where one person described the movie while the other person tried to guess the answer. Elliott from “E.T.” and Choi Ik Hyun from the film “Nameless Gangster: Rules of the Time” were revealed as some of the characters the cast would be dressing up as, and Lee Soo Geun said, “This is the laughter thief from what I can see. He has a catchphrase.”

After seeing Jack Sparrow from “Pirates of the Caribbean” as another contender, WINNER’s Song Mino commented, “It’s about time for a blue character to come out,” and Super Junior’s Kyuhyun added, “I don’t think there’s a character for me yet.”

When Olaf from “Frozen” was shown to the cast, the members groaned out loud. SECHSKIES’s Eun Ji Won made everyone laugh, asking, “What is this? A bug?” 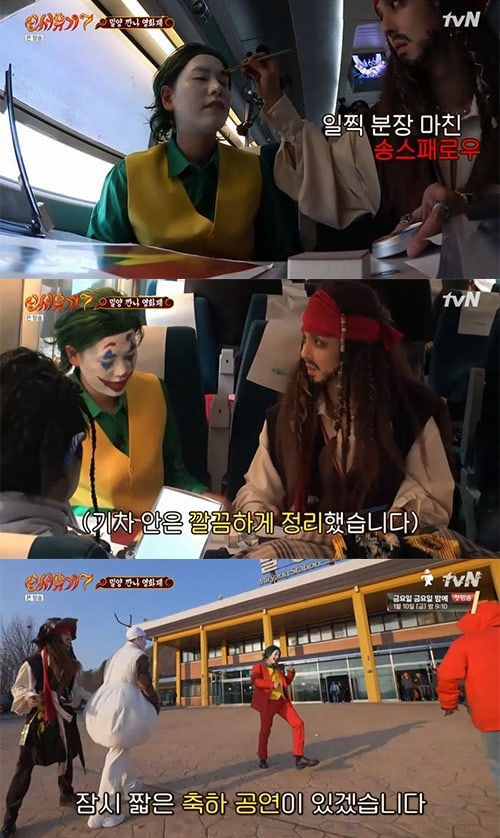 After dressing up as their characters and arriving in Milyang, the cast members walked out of the train station and walked a red carpet prepared by the staff for their very own “Milyang Canna Film Festival.” Each cast member embodied his character as he walked down the red carpet and showed off the unique traits of each cinematic figure.

Kyuhyun especially got into character by asking the staff for a piece of paper where he wrote, “I can’t hold in my laughter hahahaha.” He walked, talked, and laughed like the Joker and was the lucky winner of getting a room all to himself.

new journey to the west
How does this article make you feel?