The identity of contestant Diary was revealed on this week’s episode of “The King of Mask Singer”!

During the December 29 broadcast of the singing competition, Diary and contestant Bruce Lee faced off in the first round. Both contestants opened the battle with a duet of Kim Hyun Shik, Kwon In Ha, and Kang In Won’s “Watercolors of a Rainy Day” (literal title). 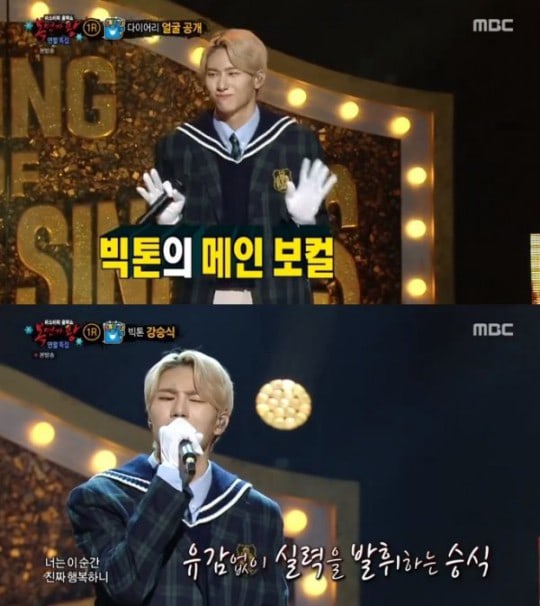 Bruce Lee won the round with 51 votes to 48 and moved on to Round 2. After covering Kim Jo Han’s “I Want to Fall in Love” for his solo performance, Diary took off his mask and revealed himself to be VICTON’s Seungsik!

Lovelyz’s Mijoo was visibly surprised after the identity reveal, and she commented, “I really like VICTON, so I’m really sorry that I couldn’t recognize you.”

Following Seungsik’s introduction, MC Kim Sung Joo surprised everyone on set when he revealed that the show had received over 1,000 comments requesting Seungsik’s appearance on the show. He also brought up VICTON’s first music show win since their debut in 2016.

“I thought a lot about the past. I had a beef barbecue party with the other members,” Seungsik responded.

When asked if he had wanted to meet any of the panelists, Seungsik answered, “I really wanted to meet Kwon In Ha sunbaenim. The track ‘Watercolors of a Rainy Day’ was released before I was born. It’s admirable that he’s been a singer for so long.”

Following the broadcast, VICTON’s official Twitter shared several photos of Seungsik with a caption that read, “The star of ‘Diary’ from ‘The King of Mask Singer’ was none other than Seungsik! Please continue to love and support VICTON’s sweet main vocalist Seungsik, who will continue to comfort and move you with his precious voice.”

VICTON
Seungsik
The King of Mask Singer
How does this article make you feel?