On the December 29 episode of SBS’s “My Ugly Duckling,” Jung Yong Hwa appeared as a special guest.

After introducing himself and greeting the panelists, the singer talked fondly about performing at the Dodger Stadium in Los Angeles a few years ago. Jung Yong Hwa explained that he had been invited to sing “Aegukga,” the Korean national anthem, for Korean Day in 2014.

“Even until now, it was the most nerve-racking moment of my life. First of all, I had to sing a cappella.” Jung Yong Hwa explained. “The stadium was so big that I heard the cheers a few seconds later. Usually, you begin singing when the music starts, but a red light turned on, and I started singing. I was so scared that I’d be off-pitch. I worried for a month about what would happen if I messed up.” 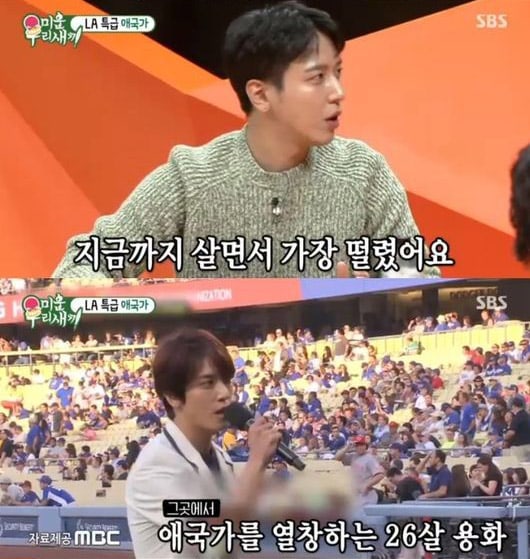 Seo Jang Hoon praised the singer and pointed out, “There are a lot of singers who make mistakes while singing the national anthem and have that moment following them for the rest of their lives.”

Jung Yong Hwa later added, “It was an extremely meaningful performance since it was for Korean Day. After completing [the performance], I was so moved.”

Watch an episode of “My Ugly Duckling” below!

CNBLUE
Jung Yong Hwa
My Little Old Boy
How does this article make you feel?