The American news program “CBS This Morning” featured interviews with f(x)’s Amber Liu and soloist AleXa as they talked about life as K-pop idols.

The January 2 episode of the show included a segment about what it described as “the dark side of K-pop.” It mentioned the recent passing of Sulli and Goo Hara and talked about pressures that artists face.

In addition to the aired cuts of the interview, “CBS This Morning” shared their longer interview with Amber Liu via social media. In one part of their talk, Amber Liu spoke about expectations within the industry to appear perfect.

“I remember that I was too dark, like my skin was too tan and I had to brighten my skin,” she said. “I lost a lot of weight. I developed a lot of really bad eating disorders.” She also talked about how there’s pressure to do plastic surgery because everyone is doing it, and that everyone is constantly checking to make sure all aspects of their appearance look perfect.

“I cannot deny that there is a big difference between male and female levels in the K-pop industry,” she said. “There’s definitely like a floating joke going around that for girls, you have to go for the general public popularity; for boys, you need a fandom, like a big passionate fandom, and you have to steal the hearts of all your fans. And again, I can’t speak for everybody, but there is a big divide.”

She described that at least in her own circle and for herself, the biggest thing for girls is being skinny. “Everybody’s just like, ‘You didn’t eat today, right? No, I didn’t eat either,'” she said and explained that they often talk about their diets.

“It’s scary, you know,” Amber Liu said. “I’ve definitely done some of them. I’ve really screwed up my body. But for boys, it’s definitely a lot more lax. I obviously know that they have – there’s obviously a lot of rules for them too.”

She went on to say that she thinks that for women, there’s a bigger emphasis on visuals and how they look. “It’s something that we can’t ever really win because when I talk with a lot of my male celebrity friends, they’re never really worried about their weight,” she said. “But for girls, it’s what we talk about all the time. Like, ‘We can’t eat’ or ‘What diet are you on?’ or ‘Oh, I tried this procedure today, do you want to try it?’ It’s scary and it’s very unhealthy.”

WATCH: K-pop star and former f(x) member Amber Liu (@llama_ajol) opens up about her experience in the industry and the pressures many female idols face.

"My skin was too tan and I had to brighten my skin. I lost a lot of weight. I developed a lot of really bad eating disorders." pic.twitter.com/B7RkTy1cuI

Amber Liu shared, “When [people] hear you’re getting help, they’re like ‘What? Why are you getting help? That’s weird.’ And that stigma against mental health is just so strong.”

The show described what it called a “nationwide mental health crisis” in South Korea, saying the subject is taboo and those seeking help face limited resources, while mentioning the high suicide rate in the country.

On top of including quotes from Amber’s interview above, “CBS This Morning” also spoke to rookie artist AleXa, who debuted last October with her single “Bomb,” about idol life.

“They’re called idols, because they’re put on this pedestal of kind of like untouchable perfection I guess in the public’s eyes, in the consumers’ eyes,” she said.

She talked about the process that went into filming her music video for “Bomb,” explaining, “The music video took two days to film, 24 hours each day almost. With like six costume changes. Six or seven set changes. And whenever I’m performing, I always get this adrenaline rush.”

“I myself have struggled with self-confidence for years and finding the capability to love myself, but I have recently stumbled upon that,” shared AleXa. 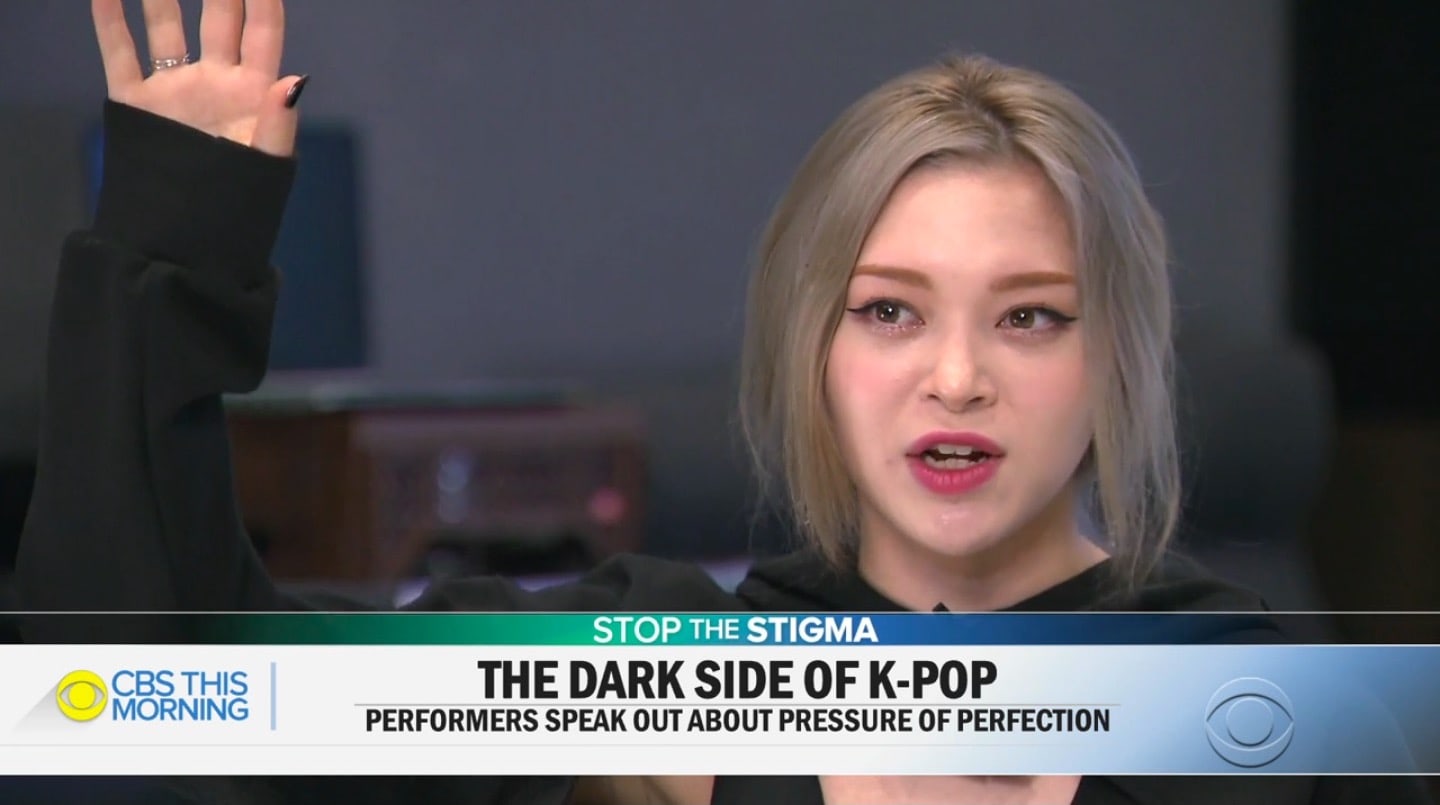 In an additional video shared by CBS on social media, Amber Liu spoke about Sulli and the comments she dealt with.

“Sulli was like a ball of joy,” said Amber Liu. “She was always so cute, so rebellious, but you know, she was always like, ‘Alright, let’s do it.’ She was quirky. We had this joke that she’s my little brother and I’m her older brother. Yeah. Sulli was great and I miss her a lot right now.” She added, “To be really honest, [I’m] still processing a lot of it.”

Amber Liu also described how Sulli would tend to become hurt when she read comments but would then get over it within a couple hours. “I always thought she was really, really cool for that,” she said. “When I read a comment, I’m just like, ‘Ugh, I can’t deal with this anymore,’ and I just shut down.” In contrast, Amber said that Sulli would read it, react, talk about it, and then move on.

Amber Liu said, “But after she was going through some image changes and taking on new, different types of jobs, you know, it’s definitely not the image that she started out with and I think that change was very, very surprising to people.”

She went on to say that as she saw the way people talked about Sulli, she had always wanted people to just “let her live, let her be an artist, let her be an actress.” She said, “That’s what art is. It’s expression, you can’t expect the same thing from the same person constantly.”

“But yeah, when I would see articles about the next ‘Oh, what did Sulli do now?’ or something, I was just like, ‘Why is this a big deal? This is a girl just living her life.’ That’s how I thought about it at least.”

"Just let her live. Let her be an artist… This is a girl, just living her life."

“CBS This Morning” also included a clip of Amber Liu saying, “I feel like the easiest thing that we can all do, everybody can do, is just try to be kind to one another.”

Watch the segment below:

Amber Liu
f(x)
Sulli
AleXa
CBS This Morning
How does this article make you feel?