“War of Prosecutors” is the cure for the Monday blues!

The JTBC series follow the lives of ordinary prosecutors and centers on the story of a prosecutor named Lee Sun Woong (played by Lee Sun Gyun), who works at his local district’s Public Prosecutors’ Office, and a prosecutor named Cha Myung Joo (played by Jung Ryeo Won), who was a rising star at the Central District Office before suddenly getting transferred to a branch office.

Here are three reasons why the drama is being loved by viewers:

Lovable characters you can empathize with

The biggest reason why “War of Prosecutors” is so loved is because of the diverse charms of the relatable characters. The prosecutors in this drama are not superheroes who face evil with a sense of justice or people who boast of power, but normal human beings who work for the second criminal division of the Jinyoung branch.

First off, there is Lee Sun Woong whose hobby is “begging investigations” and goes back and forth between being a pathetic loser and sharp prosecutor. Then there is Jo Min Ho (Lee Sung Jae), a “tsundere” (cold on the outside, warm on the inside) chief prosecutor who tries hard to be youthful, and Hong Jong Hak (Kim Kwang Gyu), who doesn’t have a single bad bone in his body. Oh Yoon Jin (Lee Sang Hee) is the working mother struggling between career and family who we all have seen at some point in our lives and Kim Jung Woo (Jeon Sung Woo) is a rookie prosecutor whose priority is capturing photos for his social media and meeting the right girl via blind dates. Then there is Cha Myung Joo, a star prosecutor who was demoted and relocated.

Each character has a distinct personality and a sympathetic story. Added to this are the amazing acting skills of the actors. 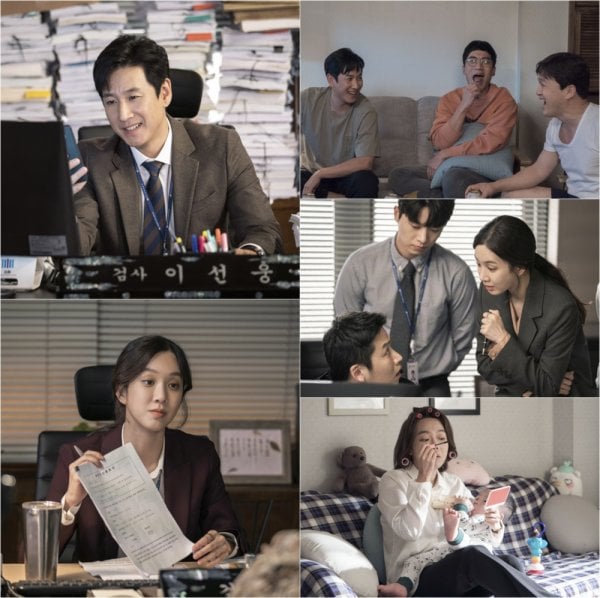 Refreshing stories that are believable

Instead of a massive conspiracy or bloody revenge, “War of Prosecutors” features events that can be fully encountered in everyday life. The past four episodes revolved around realistic cases, like ones involving cow dung, fraud, and recurring payments. They are all everyday events that can happen to ordinary people, but on the other hand, they were not very much covered in legal dramas, so it was a refreshing experience to see them on screen now. The drama broke away from the usual prosecutor dramas and evoked sympathy with believable stories.

Viewers can’t take their eyes off the drama because of the CG and ASMR. There are also interesting eating scenes that captivate your attention all the time. The cute CG captions evoke laughter from the viewers, and the variety of food, including eel soup, pasta, oysters, and black bean noodles, stimulate the desire to eat late night snacks.

What is your favorite thing about the drama?

“War of Prosecutors” airs every Monday and Tuesday at 9:30 p.m. KST.