In addition, the song made it into the Top 10 of the Top Songs charts on iTunes in 70 regions.

On Korean music charts, her title track “Dark Cloud” was at No. 1 on Soribada and Genie Music at 8 a.m. on July 7. “Winter Flower” took No. 1 on Bugs at the time while “Dark Cloud” followed at No. 2.

Younha has reached No. 1 on the iTunes Top Songs chart in the United States!

On January 6, Younha released her fifth mini album “Unstable Mindset,” which includes the title track “Dark Cloud.” One of the b-sides on the album is “Winter Flower,” which features BTS’s RM, who also took part in writing the songs’ lyrics. 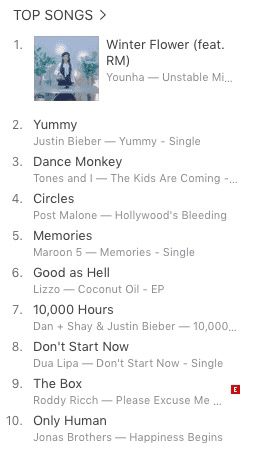 While Younha is the first to reach No. 1, other Korean female soloists who have reached the Top 10 on the iTunes Top Songs chart are Lee Sora with “Song Request” (featuring BTS’ Suga) and BLACKPINK member Jennie with “SOLO.”

“Winter Flower” has also topped songs charts in many more regions around the world. Stay tuned for news on the total!

Younha is a Korean soloist who first made her debut in Japan in 2004 before debuting in Korea in 2007. She has released popular tracks including “Comet,” “Password 486,” “Rain Shower,” “Waiting,” “We Broke Up Today,” and many more. RM is a longtime fan of Younha and often recommends her music on BTS’s Twitter.