Kang Ha Neul gave his friend some support as he got ready to compete on “Mister Trot”!

TV Chosun’s “Mister Trot” is the follow-up to the massive hit show “Miss Trot,” which was an audition program in 2019 that searched for a star that would lead the second golden age of the genre and propelled its winner Song Ga In to stardom. Trot is a genre of Korean pop music known for its distinctive singing style with vocal inflections.

On the January 9 episode of the show, Chu Hyuk Jin appeared as a contestant. Chu Hyuk Jin, who was born in 1992, debuted in 2014 as the main vocalist of the boy group A.Cian.

Chu Hyuk Jin described Kang Ha Neul as his biggest fan, which shocked everyone. He explained that Kang Ha Neul really likes his singing and supports him a lot, adding, “We were in the military together and performed a musical together. When I told him I was going to be on the show today, he cheered me on.”

The show shared the video call that the singer had with the actor before he went up on stage. Kang Ha Neul assured him, “You’re definitely going to make it through!” but also asked, “If you make it through, does someone else get eliminated?” Kang Ha Neul encouraged him to have fun.

Chu Hyuk Jin made him laugh by saying, “I’m going to become the Kang Ha Neul of the trot world. You’re my role model.” Kang Ha Neul promised, “If you make it to the finals, I’ll come and watch in the audience.” He then joked, “Although I get the feeling I won’t be able to do that,” which made his friend laugh. 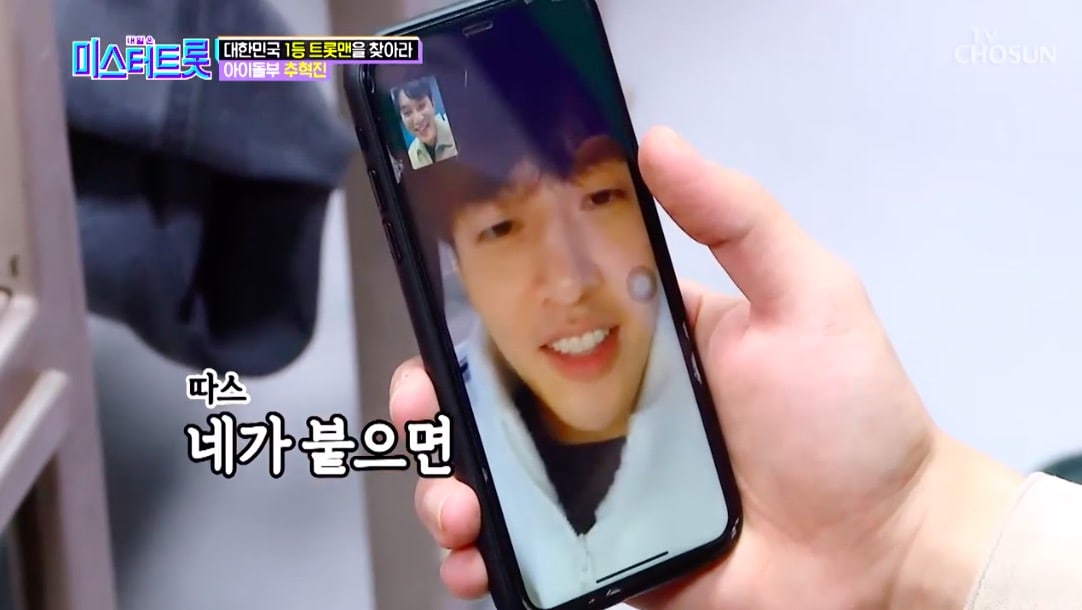 Chu Hyuk Jin sang Hyun Chul’s “Love Is Like a Butterfly” (complete with a dance break!) and made it into the next round.