On the January 9 episode of “Happy Together,” Joy was asked about some changes as a seventh-year idol.

“I became a bit freer,” said Joy. “I used to diet, send a photo of my weight after weighing myself, send photos of what I ate for every meal, get permission every time I went out, and had a curfew of 11 p.m.” She continued, “Now, each of us has our own room. It’s really nice. No matter how close we are, each of us has different life patterns. I used to come home late at night when I filmed a drama, and I felt bad turning on the lights. So I used to turn on the flashlight on my phone to put lotion on.” 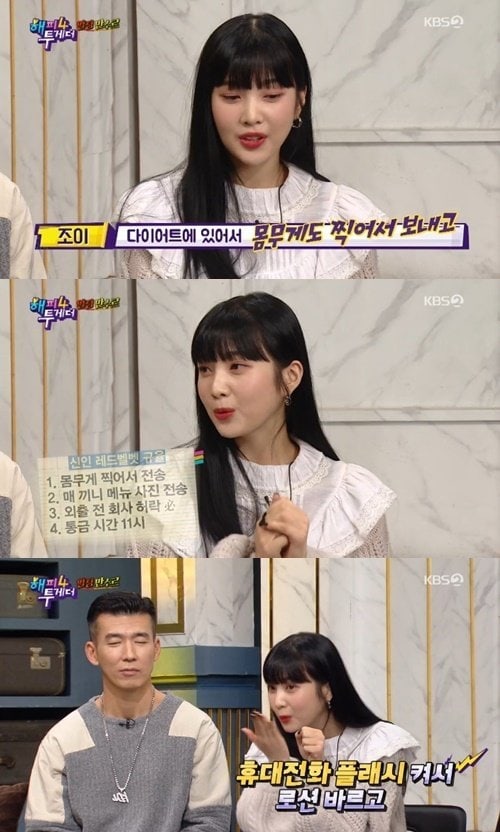 Joy then described Red Velvet’s room-selection process. “We did lucky draws in order to be fair. The rooms are big. Four of the rooms are nice, but one room is similar to a utility room. At first, we suggested we live separately with two people in one dorm and three people in another. But the agency wanted the five of us to stick together. Seulgi said that she would use that room, but her one condition was to use the hallway and living room as her dressing room. I realized that this was Seulgi’s bigger goal.”

Joy also shared some of Red Velvet’s dorm rules. “In order to respect each other’s privacy, we made a rule that people who aren’t members aren’t allowed in the dorm. We have to ask for permission [for visitors] in our group chatroom. For example, I have to say, ‘My mom is going to visit for a bit,’ and ask for permission.”

When Yoo Jae Suk asked if the visitor isn’t allowed if one member disagrees, Joy replied, “They don’t do that. But one time, I invited my youngest sibling to my room without telling anyone and received a complaint [from the members]. They said, ‘Let’s tell each other beforehand. This isn’t right,’ and I said I was sorry.” 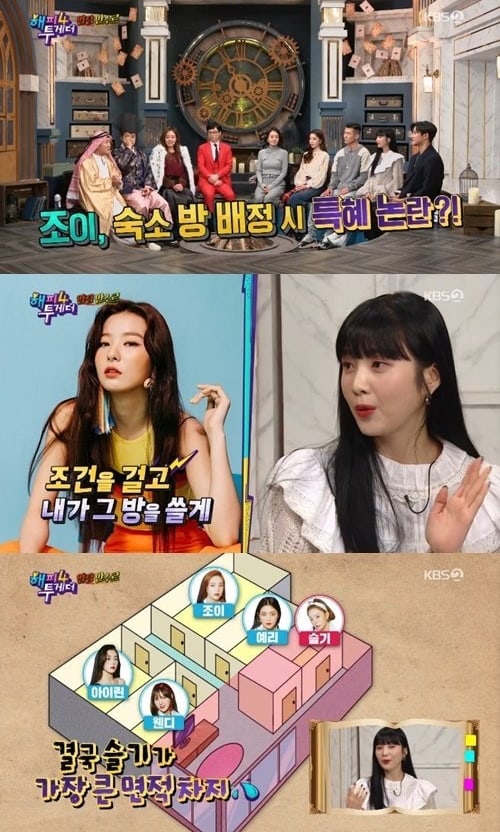 SF9’s Rowoon also shared some of the boy group’s rules. “I think it’s similar,” he said. “When I’m home, I want to be comfortable and want to protect the space we call home.”

He continued, “We wash our underwear with our laundry altogether. But because it was hard to keep track, we decided for each member to wear a certain brand of underwear. So I only wore the brand that I liked, but another member was wearing underwear from the same brand. That member had purchased some from that brand and I said, ‘This is wrong.'”

As for socks, the SF9 member added, “I gave up on socks. I don’t buy pretty socks and just buy [plain] ones.”

Relating to Rowoon’s story, Joy said, “Our clothes get mixed up a lot and sometimes they go missing. I don’t get it because no one took it, but it just goes missing. It’s not just me. Other members also wonder why their clothes went missing. We used to designate someone to do laundry, but then made a rule that you should hand wash your own underwear.”

Other hosts commented that although Joy gained freedom from her agency, she seemed to now live by strict rules in the dorm. Yoo Jae Suk stated, “But because you’re living strictly like this, you’re able to avoid small and big fights,” and both idols agreed to his statement. 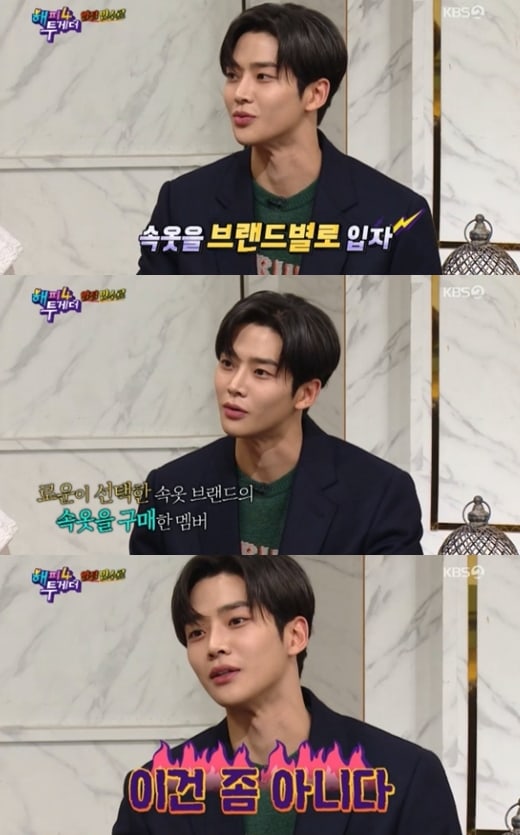 Red Velvet
SF9
Happy Together
Joy
Rowoon
How does this article make you feel?