Actor Kim Min Joon revealed the story of when he met his wife and brother-in-law for the first time!

During the January 12 episode of SBS’s variety program “My Ugly Duckling,” Kim Min Joon appeared as a special guest.

When asked about his recent marriage to Dami Kwon, G-Dragon’s sister, Kim Min Joon replied, “I’m happy, and I’m at peace. I feel like I’ve become healthier.” The actor was also pleasantly surprised after being told that Dami Kwon had previously entered Business of Fashion’s “Top 500 Most Influential People in the World’s Fashion Industry” list.

He later reminisced about how he was introduced to Dami Kwon as he commented, “One of my juniors asked if I wanted to go on a blind date. I did hear that she was G-Dragon’s older sister. [The junior] told me, ‘Just try meeting her without being biased, she’s a good friend of mine,’ so I said, ‘Alright.'”

Kim Min Joon then talked about meeting his in-laws for the first time as well. He said, “I was trying to look confident, but I was honestly really nervous. My in-laws have a cat, but it greeted me while waving its tail. I thought, ‘I’m glad the pet is welcoming,’ but as soon as I touched it, I started bleeding after being scratched. So I think the atmosphere became one where [they thought] ‘We should be good to him.'” 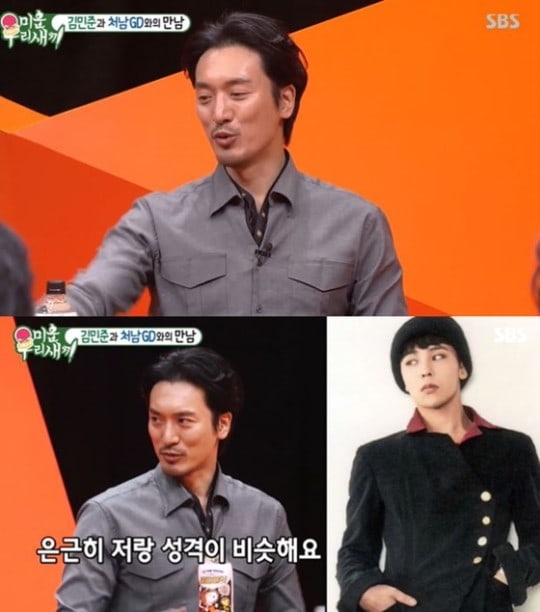 In regard to his first meeting with G-Dragon, Kim Min Joon stated, “We met when he was out on a break [from the military]. It was a little awkward. I did feel a bit nervous. When my older sister brought home the person she wanted to marry, I was really fussy, so I thought, ‘I should’ve been nicer to my brother-in-law.’ But I learned that I had already been approved from the ‘document screening process.’ He had apparently said [to Dami Kwon], ‘I heard you’re dating a celebrity. Who is it?’ Apparently he asked around about me, but he said I was okay, so I felt relieved.”

Seo Jang Hoon then brought up G-Dragon’s recent coffee truck gift for the actor, and Kim Min Joon responded, “Our personalities are actually quite similar. We act indifferent while caring for others. Apparently he tosses two hats at [Dami Kwon] when they meet. When she asks, ‘What’s this?’ he replies, ‘One for you, and one for [Kim Min Joon] hyung.'”

Check out an episode of “My Ugly Duckling” here!

BIGBANG
G-Dragon
Kim Min Joon
My Ugly Duckling
How does this article make you feel?