On January 12 KST, the idol used the Q&A function on Instagram to connect with her fans. One fan asked her what she was doing at the moment, and Yeri answered, “I’m lying down and listening to music. I actually have a really bad cold. I think I’ll know in a few days if it’s the flu.”

In response to a question about what songs she frequently listens to these days, Yeri shared a screenshot of Baek Yerin’s “Here I Am Again.” Yeri added, “It’s the OST for ‘Crash Landing on You.’ I’d been listening to it every day only in the drama, but it was finally released today! I’ve been eagerly waiting for an hour to watch [the drama] today as well. I’m going to watch it even if I’m sick!” 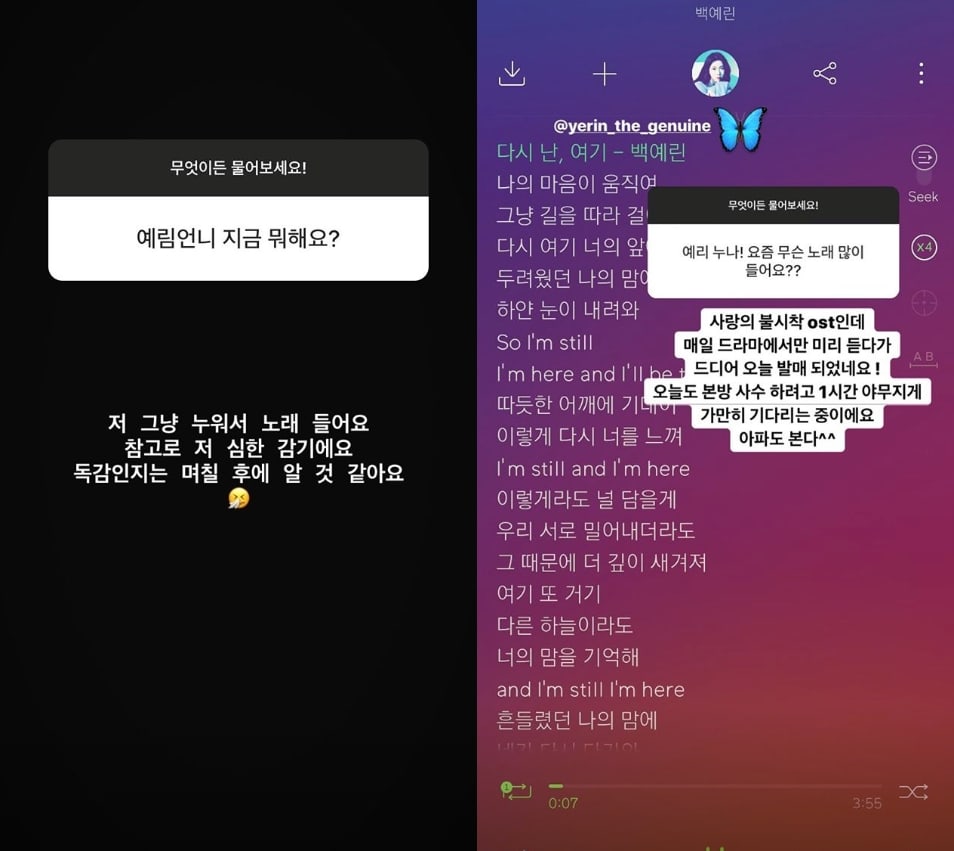 Another fan asked, “Did you eat something delicious after the concert? Please always be healthy.” With a photo of an IV drip in her arm, Yeri replied, “No… I got an IV drip yesterday and today, so I didn’t feel well after eating something heavy. I just ate a salad not too long ago.”

One fan was curious as to how she became a fan of Tablo’s daughter Haru and her favorite thing about her. Tagging Tablo’s and Haru’s Instagram accounts, Yeri responded, “There isn’t a clip of Haru that I haven’t watched. My love, my baby. I love you, Haru. This unnie wants to see you.”

When one fan asked, “What drama do you enjoy watching these days? I like ‘Crash Landing on You,'” Yeri said, “Me too… Watching it now when it airs at 9 p.m.! I’m going to go watch it. Time to focus.” 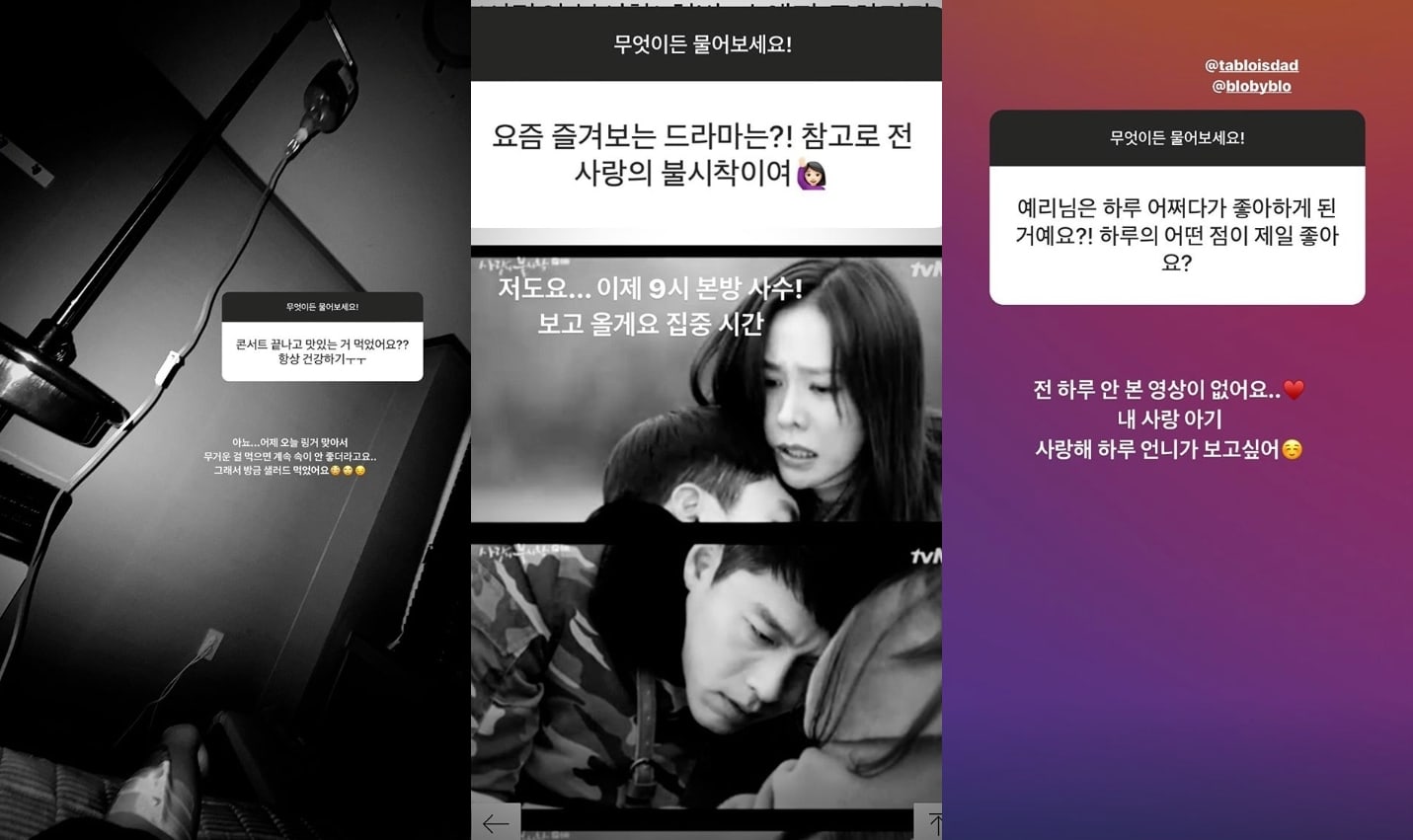 Finally, Yeri ended the Q&A session by revealing a brief snippet of a long message she’d received from SM Entertainment founder Lee Soo Man in his group chatroom with Red Velvet. She wrote, “I received a touching text message from Lee Soo Man during my live [Q&A]. At the end, he wrote, ‘Find strength, Red Velvet,’ so even at this late hour, I’m gaining strength.”

In the message, Lee Soo Man talked about how they had produced different variations of “Psycho” for the released track, the music video, and broadcasts, so that various sounds in the background of the song could be heard even when played on phones without earphones. He also expressed his hope for the members to enjoy listening to and promoting the track. He then explained that the night before giving the track to the girl group, he had called Yoo Young Jin in the recording studio asking for a sound effect to be added into “Psycho,” and he added that they created the gliding bass sound from 11 p.m. until 5:30 a.m. the next morning. 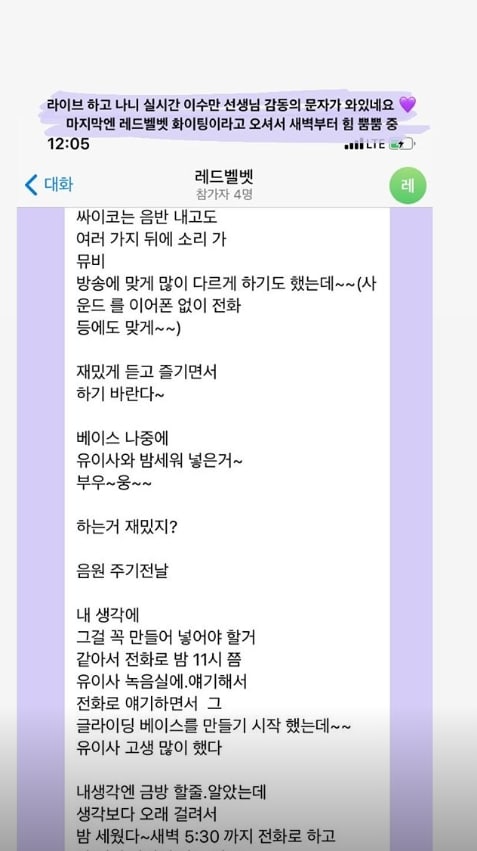 Red Velvet has been sweeping music shows with “Psycho,” and they recently took home their sixth win for the song on “Inkigayo.”