Breaking
by U. Kim

SM Entertainment has denied a report that claimed that Chen is already married.

On January 13, the news outlet Sporbiz reported that according to an acquaintance, Chen and his non-celebrity girlfriend held a wedding ceremony that day. The report also stated that his girlfriend is seven months pregnant.

The article has now been edited to state that SM Entertainment has told them that the reports about the stage of her pregnancy and the claims that the wedding has already been held are false.

SM Entertainment has announced that EXO’s Chen will be getting married.

The agency’s statement is as follows:

Hello. This is SM Entertainment.

Chen has met someone precious to him and will be getting married. The bride is a non-celebrity, and the wedding will be held privately with only their families in attendance.

To respect their families’ opinions, the wedding and everything related to it will be held privately, so we ask fans and reporters for their kind understanding.

Chen will continue to work hard as an artist.

We ask you to send Chen lots of blessings and messages of celebration.

A source from SM Entertainment confirmed that Chen’s fiancée is pregnant. The source said, “It is true that Chen’s bride-to-be is pregnant.” They added that because she is a non-celebrity, they cannot reveal how far she is in her pregnancy or any other related details.

Hello, this is Chen.

I have a girlfriend I want to spend the rest of my life with. I was worried and concerned about the situations that would arise as a result of this decision, but I had been discussing with the agency and our members because I wanted to announce the news at least a little bit earlier so I wouldn’t surprise you with the sudden news.

Then, a blessing came my way. I am also taken aback, as I cannot do what I had planned with the agency and members, but this blessing has given me more strength.

I couldn’t lose any more time thinking about when or how I should announce this, so I mustered up my courage.

I’m really thankful to my members for genuinely congratulating me after hearing this news, and I deeply thank our fans for sending me so much undeserving love.

I will never forget this feeling of gratitude, do my best in my place without changing, and return the love you have given me. 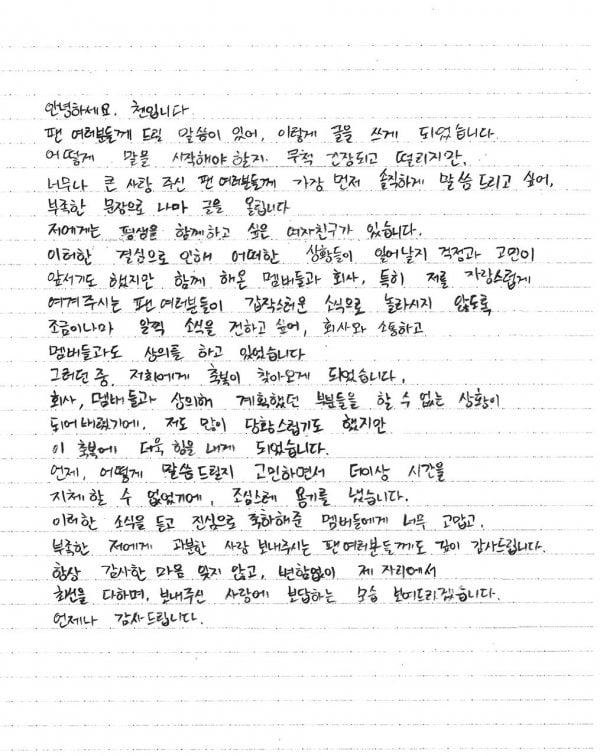