Zico’s new solo track “Any Song” is a huge success on charts!

As of 2:30 p.m. KST on January 15, Zico’s “Any Song” has achieved a certified all-kill. The digital single was released on January 13, and the song swept major realtime charts shortly after. 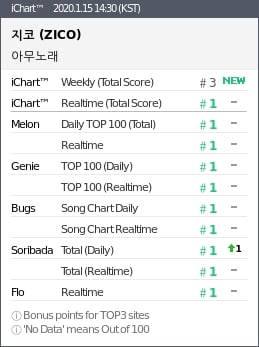 A certified all-kill is given to songs that score No. 1 on the daily and realtime charts of Melon, Genie, Bugs, Mnet, Naver, and Soribada; and the realtime charts of Flo and iChart. It remains to be seen if Zico will also score a perfect all-kill, which includes topping the iChart weekly chart as well.

Last October, Naver Music and Mnet were taken off of iChart as their services came to an end, with Mnet combining with Genie Music.